This past weekend we had session 79 of my Swords & Wizardry game. The group was introduced to or rescued a new party member with a secret origin. The new player did not get a chance to show off much of his abilities because this was a low combat session. In fact, most of the combat occurred before they met. I used the tired old trope that they find the new player in a prison cell. In this case, it was the best option because they were in a pocket dimension wizard tower.

This is part 2 of the Lair of the White Worm adventure. But it has been difficult to keep the players moving along toward the final goal. I guess it just does not feel compelling enough to them even though the final enemy attacked one of the players. I suspect that without further motivation they are not going to follow up on the story clues. At the end of the last session, they did tell me that they wanted to investigate the secret vault beneath the Purple Bugbear Tavern. So I can prepare for where they are going next. I have just thought up another side trek so I may also need to use it.

The Company of the Black Dragon has learned of a Sorcerer’s Tower hidden in a book. Using clues gained from some bugbear thieves they have entered the tower. On the second floor, they battle some hellhounds and find a treasure room. Lakima opens a bottle and mist pours out and forms into a horse. Unable to get the horse to go back into the bottle they decide to ascend the wooden steps to the third floor. The horse is left behind.

On the third floor, they immediately encounter a Hill giant in what appears to be a torture chamber. Eathwund and the remaining skeleton minions move in to attack. Lakima casts Confusion but it has no effect on the dim-witted giant. The Giant misses Eathwund with a red-hot iron poker but does impale two of the skeletons. Aashdoshan hurls a dagger at the giant stabbing it in the throat. Lakima hits it with three darts. The giant angrily pulls out the small weapons but is distracted long enough for Eathwund to drive his sword deep into its belly killing it.

After the giant falls to the floor, the heroes hear the sound of cries for help from nearby. In a nearby chamber, they find a prison with three cells. The occupants of the cells cry out to be freed. One is a man who introduces himself as Arnold of the town watch. They also release a halfling pedlar called Lydia. The third cell holds a man with a strange accent. The man introduces himself as Alrix. He tells them that he would like vengeance on the wizard Ud Lux who was holding him captive and asks for a weapon. Lantosh gives the man his battle-ax. 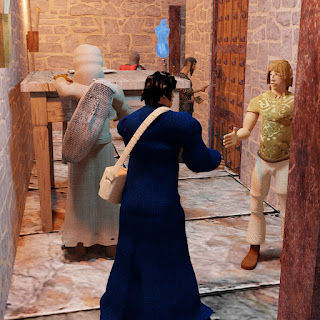 Lakima takes some time to question the three freed prisoners. Arnold says he was captured one week ago after chasing some bugbears into the bookshop. Lydia says she was captured 3 days ago. She has no idea she is in a pocket dimension. Alrix claims to have been captured several weeks ago in Dolmvay by the wizard Ud Lux. He has not seen his captor in more than a week. They all have been facing the growing uncertainty of whether the Hill Giant jailor would eat one of them. They are grateful to hear that the hill giant has been slain.

Arnold and Lydia want to leave immediately but they are told that the way out has not been found yet. They decide to wait in the prison for the party to return. Alrix asks to come along. He tells them that he wants to deal with the wizard himself. The group heads up another set of wooden steps to the fourth floor. Fenris goes up the steps first and comes down to tell everyone that there is another hellhound waiting for them. Eathwund goes up the steps as quietly as he can manage and spies on the chamber above. He sees a sleeping hellhound in a large room. Eathwund tries to sneak up on the hellhound but it wakes just as he gets near to it. He quickly stabs it in the throat with his sword killing it.

The entire company moves up the stairs to the fourth level of the tower. Past the room with the hellhound guardian, they find a summoning chamber. The workbenches are covered in cobwebs. The summoning circle looks to have been used at some point. Opening another door, they find a room well-lit by lanterns. In the room is a round table with several strange objects sitting on it – an hourglass, a quill, a closed book, and a pair of scissors. Lakima casts detect magic and discovers the quill and hourglass are magical artifacts, while the book is magical and connected to the quill and hourglass in some manner.  After a little hesitation, Lakima picks up the hourglass. He notices that the sand is swirling about in the upper and lower halves of the hourglass but not pouring through the center. All of the items are carefully placed in his bag of holding.

The door from this chamber is locked but Fenris uses his thieves’ lockpicks and is able to open the door. Inside they find a cozy room with a clean-looking bed. On a writing table, they find an open journal written by Ud Lux. The last entry is from the day before his attack on Lakima. He mentions preparing to capture or charm Lakima. Lakima spends time flipping through the journal while the rest of the group searches the chamber. They find a pair of books that appear to have blank pages. But when Lakima looks at them, he realizes they are magical texts. Alrix finds his missing clothes and equipment.

Lakima relates what he has learned from the journal. Ud Lux traveled from the lair of the White Worm on a mission to collect magic-users. In the first town he arrived in Phom Thult, he charmed a wizard called Ralthanar. Ralthanar told Ud Lux how he made a pact with a demon and used a pair of artifacts to make his tower impossible for thieves to find. By hiding it in a book. The journal describes how the Quill of Laminae works and how the Infinity glass was used to make the effect permanent. The journal goes on to chronicle Ud Lux’s capture of three more magic users including Alrix. Although the journal mentions that Alrix appears to use a primitive form of innate magic. Ud Lux used the tower to travel from the Northern wastes south of the Valen peaks. Before he charmed some bandits to be bodyguards and the bugbears were placed in the tower.

Once the chambers have been thoroughly searched the entire group descends to the first floor. They find that the bugbears are still safely behind the webbed door. Lantosh asks the bugbear leader the secret to leaving the tower. At first, the bugbears refuse to tell unless they are released. But eventually, they do agree with the promise of being released somewhere outside of the town.

Now that he understands how the tower works, Lakima removes the book from the Bag of Holding. Opening it he sees that a large number of the pages have been cut out in the shape of a key. Lakima touches his paper key to the book and everyone in the room is turned to powder and drawn into the book. The Book of Keys falls to the floor in the tower and the heroes all appear in a small bookshop. A single member of the town watch on guard cries out in alarm. They assure the guard that the bugbear menace has been ended.  The owner of the Bookshop arrives and demands to know what is going on. After being calmed down they learn that he bought the book from the apprentice of Malyn the apothecary for 5 silver coins. Lakima tells him that he is taking it as it is dangerous. The owner, Jordan Page puts up a mild protest. The local watch leader advises them to come to the town watch tomorrow to collect the reward. The members of the Company of the Black Dragon say goodbye to the guards and people they have rescued but they do invite Alrix to the Manor House. He is offered a guest room for as long as he is in town. As it is very early in the morning, everyone goes to their rooms to get some sleep. 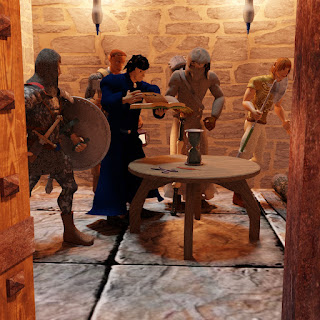 The next day Lakima identifies the magic items. He finds that the spellbook belonged to the wizard Ralthanar. The other book is a treatise on demon summoning. Lakima gives the Infinity Glass to Aashdoshan along with one of the keys and he keeps the Quill. A message arrives from the Merchant’s Guild indicating that they have found some properties meeting Lakima’s request. A much smaller group of Lakima, Eathwund, and Alrix head over to the Town Watch post and speak to Sgt. Frans. Frans signs a warrant indicating that the Company of the Black Dragon has fulfilled the necessary requirements for the offered reward. They take this over to the Keep to get paid. Money in hand the group heads to the Merchant Adventurers Guild Hall. The Merchant guild master shows them around a nearby building that would make a fine Wizards Guildhall. Lakima buys it on the spot from the current owners. He also re-enters the tower in the book and meets with the bugbears. They have all been freed by now. He tells them that he will be releasing them into the woods and touches each in turn with the quill before trapping them in a new book.

Not much happens for the adventurers over the next two weeks. Aashdoshan buries himself in the cellar and does not come out. Lakima commissions a shop to handle the furnishings for the new guildhall and finds a dwarven sculptor to make a life-sized statue of Medamellara for the hall. Meanwhile, Eathwund removes one of the dead bugbears from the tower in a book and takes it to Wynford to get it stuffed. Wynford is aghast and quotes a high price but Eathwund agrees to pay with a bonus. Then he tells Wynford to dye the bugbear purple. Alrix busies himself exploring Edgerton and finding where the best bookshops and places of learning are located. Finally, Lakima sends magical messages by messenger to Caster’s Ford advertising the new Mages Guild and warning of Ud Lux and his cronies. 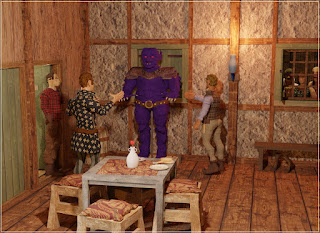 Email ThisBlogThis!Share to TwitterShare to FacebookShare to Pinterest
Labels: In Search of the Unknown, Swords & Wizardry