When last I checked I had over 600 files in my RPGNow account.  A great many of these files are rules for Roleplaying games. This is part of my still unfilled quest to find the rule system that fits me. I suspect it will never happen.


This long weekend I had a chance to read 3 of my recent purchases so here is a description of Sharp Swords & Sinister Spells (4S). 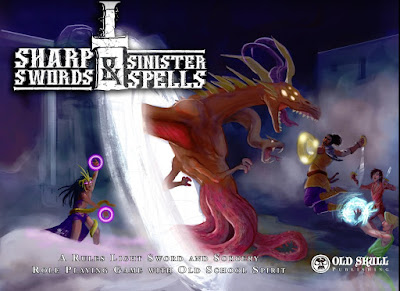 
If the Internet is too be believe these rules hail from Brazil. Which brings some interest right away. It is always interesting to see what people are playing in other countries.  They are put out by Old Skull Publishing. I got my copy on RPGNow.


The core mechanic of 4S is a roll vs. Attribute. Players generally have to roll equal to or lower than their attribute while GM’s need to roll higher than the character’s attribute score. So the character is what is important and not the monsters’ controlled by the GM. I think this is okay but a little odd. It is always best when the same rules are applied to everyone.


The twist on 5th edition advantage/disadvantage is positive and negative dice. Pretty interesting take on it actually. You add a positive die or subtract a negative die.


Characters can also attempt to push a roll - they make an extra effort to overcome a failed roll. They need to explain what the effort is to get the reroll option. If they fail again the GM can make the situation worse. This seems open to argument. 4S also uses a Luck die roll.


Characters are pretty similar to OD&D in terms of class - Warriors, Specialists, and Magic-users. The attributes have been reduced to just Physique, Agility, Intellect and Willpower.


Combat is familiar as well, although the initiative is based on HD. To attack players roll equal to or lower than their attribute core (Physique for melee and Agility for ranged). Monster’s attacking characters need to roll above the character’s agility score. Damage is based on weapon type in some rather broad classes of weapons.


Healing is pretty much only accomplished with rest. Short rests heal 1d4 on a successful Physique test and long rests heal 1HD in hit points.


Spellcasting is discouraged but appears to me to be quite powerful. To cast a spell a mage makes a willpower test at a difficulty equal to the power level of the spell. Most spells can be cast at any power level. But the higher the level the harder to cast. If the spell attempts fail the mage loses the ability to cast for the day - or gets a complication decided by the GM. So mages could cast their best combat spells repeatedly. However, if a mage fumbles his willpower test (rolls a 20) a catastrophe occurs.


The rules also mention that magic items are very rare with the knowledge of how to make them mostly lost.


Leveling up is an increase in HD (more hit points) and the chance of increasing an attribute.


The rules do a very good job of recreating a Conan-style gameplay. Mages are powerful and chaotic. Combat is deadly. I would not mind running 1 or 2 stand-alone adventures in this system but it is not for me for Campaign-style play.

Email ThisBlogThis!Share to TwitterShare to FacebookShare to Pinterest
Labels: Rules