For my second attempt to play Scarlet Heroes solo I am going to stick closer to the solo rules. Last time I sent a single magic-user against a published Basic level module. This time I used the solo wilderness rules. The one modification I made was using a prepared wilderness map (the Isle of Respite).

I still want to try to get a solo player through the Palace of the Jade Sorceress but I am going to try to level him up on a wilderness adventure first. I have had some suggestions to accompany the solo hero with some henchmen but I do not want to do that. Once you add some henchmen you might as well use the Basic rules as written.

Shenhong Long is a first level fighter living in the village of Darga on the east coast of the Isle of Respite. Darga is about as remote a village there is on the island. It is a fishing village of 120 inhabitants. There is a small garrison of militia numbering six men. The head of the militia is Fen Long, Shenhong’s father. Shenhong (Shen to his friends) learned everything about fighting that he knows from his father Fen.

Darga is not full of enough challenges for Shenhong and he longs for a life of adventure. He often spends days in the nearby hills hunting game armed only with a longbow. When he last returned from a hunt he was surprised to see a strange ship pulled up to the beach at Darga. Hurrying down to the village, he met his father talking to some strangers. Refugees from Haven. Shen learns that the red tide has encroached on the island from the west swallowing up the Palace of the Jade Sorceress. Some kind of calamity has befallen the Sorceress, an explosion was heard at the Palace before the red mist surrounded it.  Shen’s father was an investigator for the Jade Sorcerer and wanted to head out himself but he is just not up to the travel. Shen steps up and volunteers.

Shen knows that the Valley of Haven is only about 20 miles away but the terrain is rough and there are no trails. He sets out the next morning, headed northwest to avoid the Windsheath Mountains. The first day is without incident and Shen sets up camp for the night.

The next day Shen continues through the hills until he sees the Jecho river in the distance. As he nears the river he spots a winding tunnel in a hillside. He decides to explore.

At this point, I switched over to the random dungeon rules. Rolling a geomantic nexus of four caves.

Shen drops his packs and excess equipment near the entrance and lights a torch. He carefully descends down the tunnel for 40 feet coming into a natural cave filled with a large underground pool of dark water. The water smells fairly stale. There is a narrow ledge around the edge of the pool. Shen spots a tunnel entrance to the northwest and the northeast. He decides to go northeast. The tunnel goes a short distance and enters another small cave. This cave is on the bank of a quickly flowing underground stream. The stream enters from the west and exits to the north. Shen leans down and tests the water. It is clear and cold. The exit to the north for the stream has a narrow ledge. Shen edges along the ledge and comes across another tunnel going to the east.

Shen follows the tunnel to the east and enters another cave. This cave also appears to be empty. However, as Shen waves the torch about he sees some white, human bones on the floor. Checking the bones Shen finds they have been gnawed upon. As he is squatting over the bones Shen hears a step and a growl nearby. Leaping to his feet he spots a bestial ogre entering the cave from a tunnel headed east.

Shen drops his torch and readies his naginata with both hands. Shen strikes first hitting the ogre firmly in the shoulder. The ogre roars in anger or surprise. It swings an enormous fist at Shen striking him and knocking him backward.

Shen is staggered and swings and missed the ogre, but the ogre fails to strike Shen while he is off balance. Shen leaps forward with an impaling strike into the mid-section of the ogre sliding the blade of his weapon deeply into the beast. The ogre flails about and Shen clings grimly to the weapon. After a few moments, the ogre bleeds out and Shen slides it off his blade.

Searching the ogre, Shen finds a jeweled pendant in a dirty pouch at the ogres waist. The pendant looks to be worth about 60 gold coins.

Shen continues east and the tunnels turns to the south. It enters another cave that looks to be the filthy lair of the ogre. To the southwest is another tunnel that leads back to the entrance cave.

Shen exits the cave and sets up camp. He treats his wound and takes a rest. Eventually, he gets up and heads down to the river. It is too deep to wade across so Shen makes a simple raft from some logs. He puts all of his equipment on the raft and swims across the river. On the other side of the river, Shen dries off and makes camp. He tries to catch some fish but does not have any luck. He stays for the night. Haven should only be a day or two away. 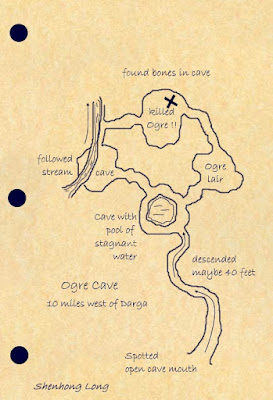