Myro took a moment to take stock. The chamber he was in was pitch dark. The floor and walls were old, worked stone. The stone was cold and seemed to suck the energy from his body when he brushed against it. He waved his hand in front of his face and thought he could see the hint of motion or it could be his imagination. Once he had closed the opening to the Tavern’s cellar all light had been extinguished. Myro paused his breath and really listened. All he could hear was the blood pounding in this ears


Well, he was safe for now. Time to get his bearings. Myro reached into his cloak and his hand closed on his flint and steel striker. Working it from memory he struck the flint. A spark lit the chamber briefly. The chamber was small, nearby on the wall was an old unlit torch. Now that it was dark again, Myro reached for the torch on the wall and closed his hand on the dry wood. Bringing the flint to steel again he sparked the head of the torch that glowed red. Blowing on the head of the torch Myro worked it to a flame.


Able to see the chamber now, Myro saw that it was an empty room, only about five feet square with a low ceiling. Facing him in the far wall was a stone door. On the face of the door was the symbol of three crowns.


“Huh”, Myro said aloud. What were the chances he thought?


Myro stepped forward toward the door and put his shoulder to it. It did not budge. He examined the crowns on the iron surface of the door. The symbols were raised figures. By the looks of it, the symbols could be depressed. Myro’s hand wavered over one of the crowns but he stopped before pressing it. Why would all three crowns be part of the door latch? It was likely, he thought, that only one of the symbols was the correct symbol. The other two might be trapped. Or maybe it has to be a pattern?


The torch guttered and slowly the flame went lower. Myro checked the torch. It was old and was going to stop burning soon. He needed to make a decision quickly before the chamber was plunged into darkness again.


Looking at the crown symbols more closely Myro could see that one seemed to have received more use. The edges were not as sharp and the others. The torch guttered again and the flame went out. All that remained was a low glow from the torch. Making up his mind, Myro pressed the more worn crown symbol. The raised symbol depressed smoothly until it was level with the surface of the door. There was a loud click sound. The door shuddered but did not move. Myro cautiously pressed against the door and it swung open easily. Beyond was a larger, cooler chamber. In the dim glow of the torch, Myro could see little. Rough shapes on the floor and no hint of the size of the chamber.


He stepped forward into the room and took a few steps. His foot slipped on something round and brittle. Like a small stick. Myro reached down and his hands closed on a slick, foot long stick. He took a few practice swings with it satisfied. Feeling ahead his hands came to a stone form rising from the floor. Feeling along the top of the stone Myro felt the familiar shape of a large candle. Relieved he used his flint and steel again, this time to light the candle. The wick lit almost immediately. The candle was a pale brown colour and longer than his forearm. The light flickered with the motion of his hand but lit a small circle of the chamber. Myro looked down at his other hand and immediately dropped his stick. It was not a stick it was a human bone.


Raising the candle, careful not to put it out, Myro took stock of the chamber. He was in a large chamber, at least fifteen feet square. Four stone biers rested against one wall. Atop the bier were several candles. One of which was now lit in his hand.


No windows and no doors, Myro mentally said in his head. It looks like the basement of some old temple. Perhaps for some long-forgotten god. The building must have fallen into ruin and the buildings of the Marn’s Crossing were built atop it. Hopefully, there was a way out of here somewhere they did not involve going back to the tavern. Myro thought that worst case he could wait a few hours and slip back into the cellar. Probably the excitement would have died down.


Myro walked carefully down the aisle in front of the stone crypts. I wonder if they buried their dead with their gold he thought. Myro moved to the closest bier and looked at it carefully. There was an obvious indentation along the edge marking a lid on a crypt. He quickly made the sign of Juvan the patron of thieves. Then he pushed against the lid of the crypt. The stone moved a few inches revealing that there was indeed a crypt beneath the stone lid. Re-doubling his efforts, Myro put down the candle on the nearest bier and put his back into it. The stone lid slid off the crypt and fell onto the floor with a crash. Myro nervously looked about then chuckled.


Myro reached over, grabbing the candle and shone it into the crypt. Expecting to see a moldy skeleton he was surprised to see a set of stone steps leading down into the darkness. 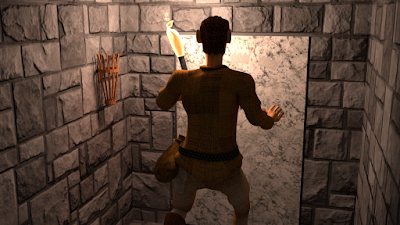 Email ThisBlogThis!Share to TwitterShare to FacebookShare to Pinterest
Labels: Fiction

I have not posted in more than a month. I have not been gaming or even reading gaming material. I will have to read some more rules I have on my bookshelves and post some more reviews.  Instead, I will post something I wrote recently to accompany a piece of 3D rendering of a seedy, fantasy tavern.


“That’s three crowns!”, the big man said and looked at Myro in expectation.


“Hey, well that’s pretty good,” said Myro.. “But it doesn’t beat my four swords!” Myro reached forward and flipped his last two cards over revealing the four swords. His opponent sputtered in disbelief. Myro leaned forward to sweep the small pile of coppers on the table to his pile.


“You, You Cheat!” The big man staggered to his feet towering over Myro and fumbled at the dagger at his hip. Myro quickly swept the coppers into his open pouch and prepared to back away.


“He’s a cheat!, Get him!” The man yelled to the other men in the small back room of the Tavern. Myro looked about nervously. As a stranger in Marn’s Crossing the room looked to be siding with this dumb oaf. Best to get out of here with my winnings Myro thought.


“I won fair, I bet you yell cheat whenever you lose!” Myro said. “Am I right” Myro looked about the room and saw a few heads start to nod in agreement. Myro could see that the mood in the room was turning in his favour. The big man looked about nervously and his dagger started to edge down.


Myro reached into his pocket to toss a few coppers on the table, “For the drink”. There was a noticeable intake of air in the room. Myro looked down at the table. Two coppers lay there and a fifth sword card from his pocket.


“Oops”, Myro shrugged. He grabbed the edge of the table and tipped it toward the man. The small wood table went over and fell in the lap of the bravo knocking him to the tavern floor.


Time to leave, Myro thought. Amongst the yelling and confusion, he continued to edge toward the door to the kitchen.


Myro darted for the door to the kitchen just as the men about the table began to move forward. Looking up he saw the enormous cook blocking the way. The fat, bald lout smiled with amusement at Myro.  That smile turned to an open grunt of surprise as Myro kicked him in the nethers and vaulted over his doubled over back.


Reaching the kitchen, Myro quickly scanned the place for exits. Two doors and a young boy tending a fire. Left, thought Myro and he tossed open the door and raced through. Abruptly, Myro’s feet flew into the air and he tumbled down the stairs to the cellar.


Damn, the cellar Myro thought. Now I am trapped. He glanced about the dirty room filled with crates and barrels. Diving behind some barrels he crawled into the darkness.


“He is in the cellar, follow me!” Myro heard from above. They are going to find me in a moment Myro thought. He crawled back against the stone back wall of the cellar behind some casks. A loose stone jabbed him in the back. A cold draft ran along Myro’s neck. He heard the sound of many feet clattering down the cellar steps.


Wait, a cold draft. Myro glanced about and saw a small opening at the point where the floor met the wall. Barely, a foot high and a foot wide. Luckily, I’m small Myro thought and squeezed himself through the tight opening. Beyond was a small dark chamber lit only by the light from the cellar. A block of stone on a metal swivel marked the entrance he had come through. Myro quickly slid it closed.


What is the innkeeper up to here with a secret chamber in his cellar thought Myro as he gingerly stood up? This bears investigating. 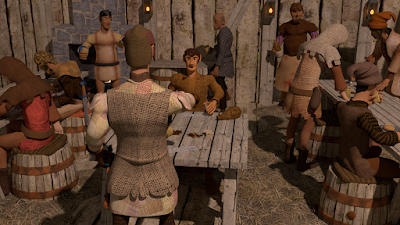