Stars Without Number, The Wolf Sector

Stars without Number comes with a sample Setting, the Hydra sector.  I also have Stellagama Publishings “Lurian Trailing Cluster - Book 1”. But given a few hours of free time I decided to take a shot at developing my own setting.  The nature of Stars without Number is that there is no base setting.  Any number of sector maps can be created, published sectors can be dropped in anywhere.

I used some online random planet name generators for some of the names of stars and planets and just came up with the rest off the top of my head.

I also wanted a few alien races so I added a few from an online Alien Race generator.

Chukulak
Home-World: Attis
Description: A race of small but aggressive  reptiles. They are highly intelligent and inquisitive. Their home-world of Attis is hot for humans with an average temperature of 80 degrees celsius. They have also colonized the nearby planet of Xenu which is even hotter than Attis and they only populate the polar regions in large numbers. They had achieved interstellar travel on their own before being discovered before the Silence.

Illarians
Home-World: Mizar
Description: A race of furry, blind marsupials. They have no eyes and see through echolocation. There world is in close orbit of the dim red sun Edolanus. They are an extremely prudish and private race and prefer not to be seen in the flesh by aliens.

I have only developed the campaign start world of Touchdown.

Touchdown is rough chunk of rock in the habitable zone around its star Oedipus. It was a mining colony before the Silence but was abandoned for centuries. Merchant-explorers discovered and renamed the planet Touchdown 50 years ago. They came from Human-centric worlds outside the Wolf Sector. The nearest star outside Wolf sector is Lason but is 3 jumps away. Huge automated strip mines work the rock of Touchdown and giant barges move ore to the Spaceport and onto Merchant ships bound for Mizar, Onai and other sectors. The mines are owned by a collection of interstellar companies with no one company holding sway over the World. The administration of the world is handled by a “Manager” appointed by the an informal council of Merchants. The spaceport is quite large for the small population with many ships coming and going at all times. 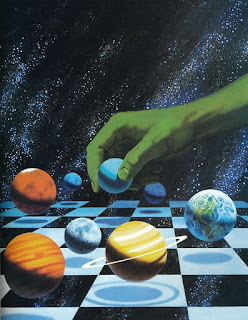