As I mentioned in an earlier post, at one time I ran a Runequest campaign based on Harn.  In Kaldor and Orbaal to be precise. While Runequest and Harn might seem antithetical they actually work well together if you consider low magic. I created new culture groups based on the various human Harnic races (Anoa, Chelni, Harnic, Ivininan, Jarin, etc.). Magic using characters were possible but only with sorcerer, healer and shaman occupations.


Below is one of the adventures I wrote for the campaign.  Called “Ransom” I wrote it in for RQ3 and set it in the Kingdom of Kaldor. 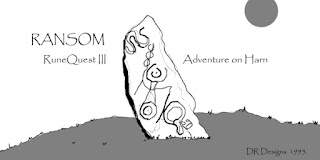 Ransom is designed for adventurers in the beginning of their careers on Harn.  It takes place at the Royal Castle of Olokand in Kaldor on the banks of the Kald river.

The mercantyler Dabin of Crasele's wastrel son-in-law Allwyn of Goth has taken up with the Lia-Kavair (local thieve’s guild) in Olokand and has been preying on traders as a lookout for highwaymen.  In an attempt to get the silver needed to repay gambling debts he has arranged to be "kidnapped" by local brigands and ransomed for 600 pence.  Unfortunately for him his father-in-law sees this as a perfect time to remove his daughter's wastrel husband and marry her to a friends more prominent son.


Not wanting to have members of his household killed for delivering the ransom without the silver he goes out to the market looking for a suitable foreigner to deliver it and not be missed.

The adventurers have been in Olokand for a number of days their money should be getting low and they are looking for work.  Before thrusting Dabin upon the adventurers let them attempt to find work for themselves.  The following table can be consulted for rumours of work and the like
to be heard in Olokand.


Rumours (1d6)
1.  Dabin the Usurer's son-in-law was kidnapped by thugs when he came out of the Black Boar in Tentru.  Dabin is not to worried by the events but his daughter Gwendellyn is greatly distressed.
2.  Maldan Harabor is hiring more soldiers to make up a fifth company of men to be stationed in Tentru.
3.  Harapa of Indama is hiring bravos to protect himself at the upcoming tourney.  He is staying at the Standing Bear Inn.
4.  Akatern of Lemdos is paying for mercenaries to transport Kath (nomadic barbarian tribe in the Kathela hills) slave women he just bought.  They are being held in Myman Hundred.
5.  Tinel of Portin needs caravan guards for a shipment of Northern furs bound for Tashal.
6.  A northern merchant, Tethog of Naisal, is hiring for a trip north into Orbaal.

Hearing of the Kidnapping

The adventurers may hear of the abduction of Allwyn of Goth in the marketplace. Allwyn is the youngest son of a clothier in Tashal who married the homely Gwendellyn of Crasele over a year ago.  Since that time he has spent little time working at the Usurer's home and instead spent a lot of the usurer's money at various local taverns.  He is known to hang-out at The Black Boar tavern in Tentru.  Allwyn went missing 2 days ago, and apparently his father-in-law has recently received a ransom note.


Some time after the adventurers have heard of the kidnapping they will be contacted by Tad of Naddo an assistant of Dabin.  The adventurers may note in the meantime that the Harabor
Guards are apparently doing little about the supposed kidnapping.


Tad of Naddo is a wizened, grey-haired Harnic man who will approach any foreign-looking adventurer in the party about a task for which they will be paid handsomely if they will come discuss it with his employer, Dabin.


If the adventurers agree they will be taken to meet with Dabin at his shop and home in Olokand.

Dabin runs his Usurer's business out of his shop and home of Hepris Avenue from a large, wooden, two-story building.  The second floor consists of the living areas for Dabin, Gwendellyn & Allwyn, Dabin's wife Cherin, and his 13 year old daughter Taerinel.  The bottom floor is the offices from which Dabin conducts business and when the adventurers arrive he will wave them aside while he derides a trader named Crella of the dangers inherent in financing a caravan bound for Orbaal.  Dabin and Crella will bargain and argue back and forth for some time before agreeing to a loan of unspecified amount at an interest rate of 17% compounded monthly.  Dabin will then issue the Usurer's note to the sullen Crella.


Finally, Dabin will turn his eyes to whatever thugs that Tad has managed to dig up on short notice from the marketplace.  Dabin will ask the adventurers where they are from and how long they plan on staying in Olokand before getting down to business.


His son-in-law of his lovely daughter has been kidnapped by scoundrels who are demanding a
sizeable but unspecified ransom.  They wish the ransom delivered at noon the next day at the Stone of Mourning. Dabin needs some trustworthy guards who are not linked to any of the other members of the Mangai and are not Harabor Guards since the ransom note said they would be watching. He is willing to pay 50d to those delivering the ransom and can be talked up to double
that amount.  If the adventurers are willing he will be waiting tomorrow at the shop with a pack mule that carries the strongbox.

What is Really Happening

There is more than one story being played out beneath the surface of the simple ransom
drop.  The adventurers are involved in several minor plots.


First off, Allwyn was not kidnapped he has become sick of living with the boorish Gwendellyn and wants to make a break for it with money.  The only reason he married was to get at Dabin's money and the latter has been very tight-fisted.  An acquaintance at the Black Boar got him on to the brigand Taebur Ironfist and they concocted the scheme to ransom him for 3000 pence and then split the monies. Allwyn is waiting with Taebur's band at the Mourning Stone.


Secondly, Dabin despises the wastrel with no business sense that his beloved daughter married and has taken this opportunity to get rid of him. It would not do for his daughter to find out so he has informed Maldan of Harabor who has a company of 8 Guards waiting in the woods near the
drop point and has sent some dupes to carry a box of stones to the ransom drop.  When the
deception is discovered the men are to ride the brigands and (unfortunately) Allwyn down  killing all of them. Dabin will be able to tell his daughter that he attempted to pay the ransom but that the vigilant Harabor Guards were tracking the notorious brigands and Allwyn died in the fighting.  His daughter will grieve but still respect him and can be remarried to someone with more business sense, and local brigands will know not to trifle with Dabin of Crasele.

When the adventurers arrive at Dabin's shop he will be preparing to place a small iron strongbox (1'x 6"x 3") in one of the saddlebags on the back of a mule.  If asked to see the money he will explain that he has already closed the box with a metal wire with his seal so it can not be opened before it is given to the kidnappers.  He does not want the adventurers examining the box because it is full of pebbles from the riverbank.


The ransom drop site is a low hill at the northwest corner of the crossroads of the road to Malteset and the road to Setanlin.  It is just over a league from Olokand past the villages of Brin, Satelton and Malteset all small villages of 20 households.  The trip on foot should take just over an hour.


The low hill is supplanted by the Mourning Stone, a large (20 foot high) precariously balanced stone with ancient runic inscriptions carved into it.  The stone is tilted somewhat making it look like a mourner.


In the nearby woods await Taebur Ironfist, Allwyn of Goth and 4 of Taebur's brigands.  Two brigands are watching the roads southwest and southeast and the others remain with Taebur.  Once the adventurers arrive on the hill the four will ride up to them with Allwyn convincingly bound over the saddle of a horse.

Taebur Ironfist will break open the strongbox and instead of 3000 pence will spill a box of stones on the hill.  The two brigands who remained on horseback with crossbows levelled will point them at the adventurers as the brigand  begins shouting at them.  He will then untie Allwyn a cuff him about yelling at him that it did not work.  Allwyn will be cursing his father-in-law.


As the brigands prepare to kill the adventurers they will hear a sharp whistle from the woods to the southeast and a troop of eight horseman will appear.  Unless the adventurers act quickly to
forestall it Taebur will order the adventurers and Allwyn killed and leap in his saddle to flee.


Six of the guardsmen will take off after Taebur and the two brigands while the other two ride up onto the hill and ensure that everyone there is dead - including the adventurers.

If the adventurers make it back to Olokand and tell their story they will be quickly arrested by guards and thrown in the dungeon beneath Caer Olokand charged with slander and robbery (Dabin will claim they took the 3000 d).


If they return to Olokand and keep their mouths shut then Maldan Harabor will be impressed and ask to see them for a little job he needs done.


If the adventurers manage to bring Allwyn away from the events on the hill and confront Dabin with his son-in-law they will be hailed by Dabin as heroes and awarded an extra 100d while Allwyn prepares to bankrupt his father-in-law with extortion. Dabin may try to have the adventurers killed out of spite.

The guardsmen on that day will catch Taebur Ironfist the notorious outlaw and return him in chains to Olokand unless the adventurers intervene in some manner.  If Taebur does survive he will want revenge on Dabin Crasele and will take it by robbing one of his caravans. In the actual game when I ran this scenario the players survived and Allwyn was killed.  They wanted revenge against Dabin but could not publicly confront him.  So I wrote an adventure called "The Heist".