More than six months ago I did a post for a planet in the Wolf Sector Stars without number setting (here). Tusa is a frontier planet, unaligned and right on the border between the Onai tribes (Chukulak) and the Unity of Suns. It has a mixed population of predominantly humans with a sizeable portion of Chukulak. In that setting I included a quick thumbnail sketch of Lowpoint Starport. 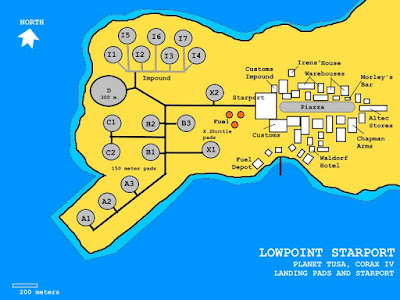 I decided to to a 3D version of the Starport Map in Blender shortly after. It is a big project and periodically I go back to it and add more details. Sometimes I wish I had put more thought into the sketch but I have more or less stuck to the design. The first thing I did is place the landscape and the buildings. I made tall towers without really thinking of the scale. Once I started detailing buildings I realized how massive these placeholder buildings were and I began downsizing their height a little.

The first area to get detailed was the Montague Hotel which I posted about earlier (here). Then I set aside the Lowpoint file for months. I have recently come back to it. Fixed up some of the initial design ideas and created new buildings.

Morley’s Bar and Gambling establishment was one of the locations. Ideal for shady ownership separating players from their credits.

I needed to fill in some detail to the landscape behind Morley’s Bar so I added a Hyper-Loop transit station allowing quick access to Newalter, the capital of Tusa. Newalter is only 150 km away from Lowpoint so initially figured aircars would be the preferred method of transit but Lowpoint must have thousands of low income local employees who need a cheap method of getting to the starport. The Hyper-loop makes the journey from port to city in 10 minutes. Locals can purchase a monthly pass for only 30 credits. A one trip pass costs 3 credits.

I also did some work on the starport. Filling in my first landing pad. The X2 pad is used by locally operated shuttles that move cargo and people from orbit to the port. The service is run by the Tusa Government office of Tusa Transport. The shuttles used are the locally produced Vanir Shuttle (Chalisgon Industries in Newalter). The Vanir is a large shuttle capable of carrying 2 M-Class containers. There is also a retro-fitted passenger version that can shuttle 80 passengers in cramped conditions.

To get passengers from the launch pad to the starport customs I initially put in a monorail but I was not happy with it. So I switched to buses, which make more sense for a frontier planet.

I also made a more spacer friendly bar located at the mid-level of a Hotel buildings. The Landing pad features a single balcony level bar.

There is still a lot of work to be done on the setting. I have finished about ⅕ of the buildings. A few warehouses and hotels are done. I still need to work on the central piazza a great deal.

Email ThisBlogThis!Share to TwitterShare to FacebookShare to Pinterest
Labels: Blender, Stars without Number