This time I am posting a map concept that occurred to me recently. A four-level dungeon where the levels interconnect culminating in a top level (level 3) split into three areas only accessible from the level below.

Your basic mapping nightmare for players. Especially if the GM does not tip the players that each stair is actually a change in level and not just a minor change in elevation. I have put only thirty feet between each level in the dungeon. So ceilings should be twenty feet at most. Average ceiling height is likely eight to ten feet.

I am calling it Brognor’s Hall and I do believe I am going to stock it because I have already come up with an idea for the plot. 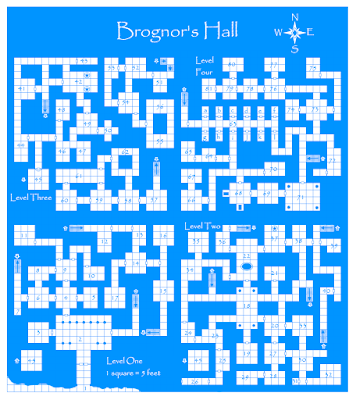 (Edit: Corrected the map for an error. Room 45 should also be in level 2. As correctly pointed out by an alert Google+ user. Turns out this map can also confuse the map maker).
Posted by tegeus at 17:43