My Scarlet Heroes solo adventure in a modified B3: Palace of the Silver Princess ended with the death of the hero Ti Yasho.  But fear not, I cannot leave the Jade Sorceress and the island of Respite in a peril so I am trying again this time with a fighter.


I am also beginning with a wilderness adventure to give the lone hero some experience before he enters the dungeon.  I could use the random wilderness tables in the rules, but since I already have a setting in mind I have created a simple little hex map of the Isle of Respite.


The island is located to the east of Nordheim but experiences a slightly more temperate climate. The winters are short and cold and snowfall covers the island. The summers are fairly long and warm. The island has central highlands and a small range of mountains.


There are a number of small villages dotting the coastline of the island. The inhabitants of these villages get buy with fishing and some farming. The largest coastal community is Enrano being a full-fledged town of 4,000 people. Enrano is at the mouth of the Choitont river.


The population is predominantly human with a sizeable percentage of dwarves. The dwarves came to Respite as skilled laborers for the Jade Sorcerer many years ago. Some returned to their homeland but many stayed as skilled crafters. Most of the dwarves dwell in Haven.


The largest community on the island is in the interior around Crystal Lake. Qishan, Haven and the Jade Palace are all near the shores of the lake. The best farming on the island occurs in the valley of Haven around the lake. There is a steady flow of produce along the Choitont river to Enrano for shipment to other islands. The valley of Haven is also famous for wine production.


The Wenpo Uplands is a region of wooded badlands. All manner of fell beasts prowls this area and only the bravest adventurers venture here. Similarly, the Windsheath mountains are home to some small tribes of Shou that make venturing through the mountains dangerous. 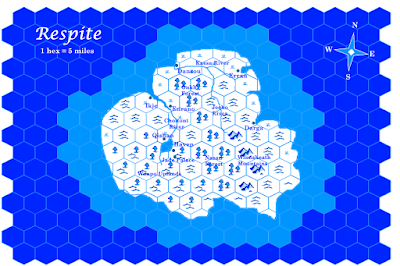 
Respite had only a small population of human fishermen until 180 years ago. Refugees from Xian settled on Respite including a powerful magic user known as the Jade Sorcerer. The Jade Sorcerer impressed upon the Shou that they should share the land and the Shou retreated to the Windsheath mountains. Artisans from all the lands were brought to construct a beautiful palace for the sorcerer in the hills overlooking the valley of Haven.


About 120 years ago, the red tide began to encroach onto the shores of the isle of respite. The Jade Sorcerer lent all of his study to the problem and discovered a way of keeping it at bay. The red tide was halted and did not advance any closer.


Recently the Jade Sorcerer decided that a long life of 240 years was enough for him. Tired of this plane of existence he expired and passed the throne to a young apprentice who he had adopted as his heir. For the past few years Argentia, the Jade Sorceress, has ruled Respite.


Since taking the throne Argentia has had to deal with a long line of suitors. Whether brought to Respite from tales of her beauty, wealth or the secrets of her magic (or some combination of the three) suitors have been coming two or three a month. Most bring gifts in hopes of impressing the young Sorceress.
Posted by tegeus at 17:52