How the Mighty have Fallen

I had an idea for a 5th Edition adventure for a campaign I was running. But it never got used as the campaign ended. The idea was for a low-level city adventure. The players are asked to help out a local good aligned temple where an accident has occurred.  I called it How the Mighty have Fallen.


The temple had commissioned a new statue of their god. A particularly big, stone statue. Unfortunately, the floor of the temple gave way and the statue fell down into some old ruins below. The idea was that it was an undercity of sewers, old cellars, and buildings overrun by troglodytes. The temple guards had been sent below and did not return. The temple sent for help.


I was doodling a map this weekend and finally put this idea onto a map. There is not a write-up for this yet but I did quickly create something to visualize it. 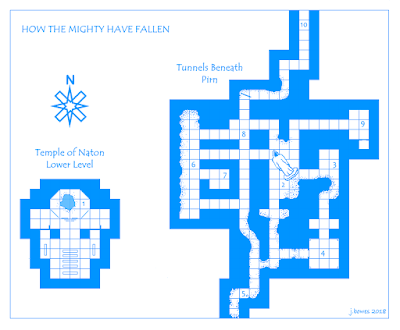