Presented here is a single session adventure for the holidays. I know many similar adventures have been published in the past but I wanted to do my own. Once I created an image of a snow cave in the mountains I had to either write an adventure for it or do a take on Rudolf the Red-Nosed Reindeer.

An OSR Adventure for levels 3-5.


“Twas the night before Mid-Winter, when all thro’ the valley
Not a creature was stirring, not even a goblin;
The stockings were hung by the chimney with care,
In hope that Father Yule soon would be there.”


This is a low level adventure suitable for any OSR style rules set in a fantasy setting. I have used the village of Stillwater from my own Stillwater Valley setting but any remote village in a fantasy setting will do. The time of year is mid-winter and the area has just experienced a large snowfall. I have used Swords & Wizardry Continual Light rules to detail the adventure. 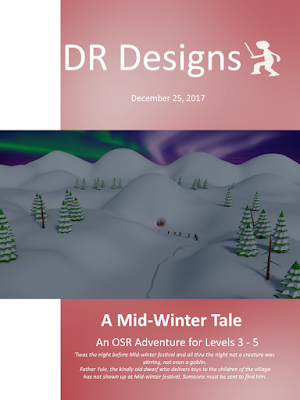 For the past 20-25 years, a kindly dwarf living in the foothills around Gloomy Top mountain has built amazing wooden toys and delivered them to the children of the village of Stillwater. Many years ago Yulgrunnar Icetoe was rescued by Chony Gysby from being swept away in the rapids at Stillwater ford. To show his gratitude Yul made toys for Chony’s children and delivered them at Mid-Winter. Yul enjoyed the reaction of the children so much he made an annual tradition of it and began bringing bags of toys for all the children of the village. A small mid-winter festival sprung up around the event and it brings in some inhabitants from other villages in the valley and travellers. Father Yule, as the children call him, arrives Mid-winter night and fills stockings at the Toppled Tankard Inn with toys. Bags of toys are put around a Yule tree for visitors.


This year there was a fierce snowstorm one day before the Mid-Winter festival and villagers were worried for Yul who always arrives in his sleigh pulled by two goats. On Mid-winter night Yul did not show up. A local traveller passing through offered to go check on the trail to his workshop and he also has not returned. It is now the day of the mid-winter festival and the local children and young adults are anxiously asking their parents to go look for Father Yule.


If only some brave travellers were to arrive and offer assistance.


Introduction for the Players
The players can either be regular visitors to Stillwater village or just passing through. They will see all the decorations up at the local inn, The Toppled Tankard, but the locals seem to be in a poor mood. Soon the innkeeper Walde will approach the players asking for their help.


Yul’s workshop is in a cave in the foothills of Gloomy Top mountain to the east of Stillwater. It is a mile by the main road and then another mile overland on a poorly marked trail. The overland trail to the hill is marked by a barely discernible line of tracks in the 2 foot deep snow. The tracks were made by the traveller who was asked to check on Yul. 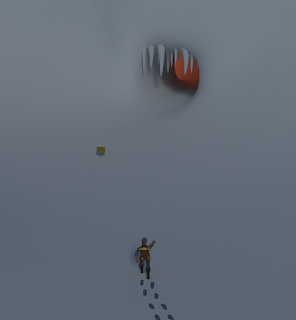 Approaching the Workshop
From a distance of half a mile the hill above the workshop is visible. A thin stream of white smoke rises from behind the hill. About a five hundred feet from the hill the trail enters a valley. The tracks disappear, covered by drifting snow. About 200 feet from the hill there is a lump in the snow the shape of a body with a spear plunged into the snow beside it. The lump is the frozen corpse of a human traveller. His abdomen has been sliced into by large claws. The leather armor on the corpse is frozen solid to the body. There is a dagger at his hip and the spear is functional but covered in ice.


The entrance to the workshop is a large cave mouth (10 feet wide by 10 feet tall). The roof of the cave mouth is blocked by icicles that descend 6 feet making the entrance only 4 feet high. Just before the entrance a sign post sticks out of the snow. If the players approach it they will see Dwarven and Common characters saying “Father Yul’s Workshop”.


There is a 1 in 6 chance that an icicle will become dislodged and crash to the ground doing 1-6 points of damage. This chance increases to 2 in 6 if a character does not state he is avoiding the icicles.


(1). Natural Tunnel
The cave mouth leads down (10 feet) a natural tunnel to an intersection. An orange glow comes from the west and it gets steadily warmer as you move to the west. It is actually hot at the door to area 2. To the east the tunnel is cold and dark. It actually gets colder as you near the door to area 6.


(2). The Forge
The door to this chamber is barred from the inside. This chamber is dominated by a blazing forge in the center of the room. The forge is putting out a huge amount of heat. Yul has stacked it high with charcoal. He is almost out. Some of the wooden stalls in area 3 have been dismantled and tossed into the fire. Yul is busy dismantling the doors to areas 4 and 5 for firewood.


(3). Stable
Double doors lead into the stables. Two, large, unhappy goats are in the two stalls in the stable. They have been kept inside for more than a day and on top of that can smell the snowbeasts. A large pile of hay rests in the northeastern corner. There is a pair of pitchforks on the wall.


(4). Workshop
This is the woodworking shop where Yul makes his toys. A large red sack rests on the floor full of wooden and metal tools. All recently built and painted. Wood and woodworking tools line the walls.


(5). Bunker
This room is normally full of charcoal for the forge. But only a few shovels of charcoal remain.


(6). Living Quarters
The door to this area is ajar. An unpleasant, musky scent grows as the players move up the tunnel toward the door. Once in the room it becomes overwhelming. This area is Yul’s living quarters. There was a kitchen, comfortable chairs about the table, a corner with a bed, bookshelves full of books and a cozy fireplace. Now the entire room is a mess. The bed is flipped on its side, the bookshelves emptied of books and the fireplace is cold. The room is uncomfortably cold. Hiding behind the overturned bed are six snowbeasts. Observant players will see tufts of fur along the edges of the bed.


(7). Storeroom
This room was full of neatly stacked crates on the north wall and shelves full of cans and boxes on the south wall. Now it has all been torn apart and flung on the floor. There are 2 more snowbeasts in this room. They will move to area 6 in two rounds.


(8). Latrine
This area has a his and hers latrine separated by a wooden partition. Behind the partition are two more snowbeasts. 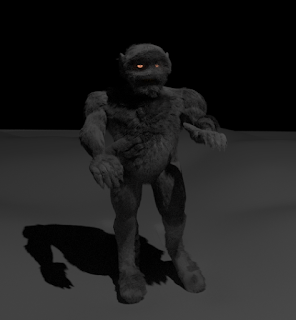 Snowbeast (Snow Goblin)
AC 5 (14) HD 3 Attack: 2 claws (1d6/1d6) Move 9
The snowbeast is a distant cousin of goblins. They are thought to have been breed by the Ogre Lords in the distant past. They are covered with matted, dirty fur that is brown in the summer and white in the winter. They radiate cold and cause all attacking them to do so at -1 if they are within melee range. They surprise on 1-2 on 1d6 in the wilderness. However, they do have a distinctive smell that can give away their presence, especially underground or indoors (negate surprise chance). The snowbeast is uncomfortable in the presence of heat (-1 to hit).

Epilogue
If the players can rescue Yul and drive away the snowbeasts he will thank them profusely and ask their help in delivering the toys to Stillwater. Unfortunately, he burned the sleigh already but the toys can be parcelled out into a number of backpacks and hauled to Stillwater. There are enough toys to fill four backpacks. Yul will promise a special toy for each of the players regardless. After the Mid-Winter festival is over Yul will invite the players back to his workshop and present each of them with a single low level magic item. These items were hidden in a secret compartment in his living quarters.