Prisoner of the Goblins

I wrote a short encounter after creating an image in Blender.

Prisoner of the Goblins

This is an adventurer for novice adventurers with a spread of experience between levels 2 and 4. I have used some place names from my Stillwater setting but this adventure is generic enough to fit in almost any fantasy setting.


The adventurers have arrived in the frontier village of Yarrow. The village is a small one with a population under 80, consisting primarily of sheep herders and hunters. The centre of the village is a Shrine devoted to the gods of law administered by the Priest Cabrahen. Cabrahen was a young adept when he came to Yarrow ten years ago and has become the leader of the village. Two days ago Cabrahen went out with two other villagers in search of a missing calf. The trio split up and ascended up into the foothills of the Cruel Sister mountains. Only the two villagers returned to Yarrow.


After Cabrahen remained missing overnight a search party set out from the village. Near some standing stones in the hills they found the lost calf (alive), Cabrahen’s staff, his wool cap and a goblin knife.


In the nearby foothills to the east of Yarrow is a well-known goblin cave. The goblins keep their distance from the villagers of Yarrow and they have never been much of a problem. Now it looks like they have taken the leader of Yarrow.


Most of the villagers hunters who know the hills and the goblins think it is unlikely that Cabrahen is still alive but the women and children of the village have insisted that something be done. The adventurers arrive just in time to help.


The villagers can offer food, shelter, warm clothing and a total of 20 gold coins to search the goblin cave. This is all the villagers of Yarrow can offer. Directions to the goblin cave are straightforward. If the players insist, one of the men of Yarrow will lead them to within eyesight of the cave. Villagers will suggest players head out early in the morning to take advantage of the goblins aversion to sunlight. It is a 3 hour walk uphill to the cave.


Key to the adventure below. Statistics for the inhabitants of the caves are given at the end.


A. The Goblin Cave
The entrance to the goblin cave is a short ravine in the side of a hill. The ravine ends in a five foot wide, 6 foot tall cave entrance. Near the entrance to the cave there is evidence that the cave is occupied by goblins. Footprints in the dirt and some food debris (gnawed animal bones). In the evening hours there will be goblins coming and going from the cave and two goblins stationed outside the cave. During the day there are no goblins in this area.


B. Sentry Cave
A small cave off the main entrance is used for sentries to guard the goblin lair. At night this cave is empty but during the day there are 6 goblins and 4 wolves stationed here. The goblins are not alert but the wolves are alert. One goblin has a whistle for alerting the entire lair if they come under attack.


C. Central Cave
This large cave has four exits and is a central area for the goblins. At night there  will be 8 goblins here sitting around eating deer meat. They are armed with spears. During the day this cave is empty.


D. Cookfires
This cave is the cooking area for the goblins. There is a natural three foot in diameter chimney leading 10 feet up to the outside. Beneath the chimney is a large cooking fire with a large iron pot suspended over it. The fires are burning all day and night. The fires are low but the coals are very hot. The stew is always simmering. In the stew is a mix of various animal meats. During the day there is one goblin here stirring the stew (the goblin witch doctor). At night there are 8 goblin woman here and 6 immature goblins. The woman and young will fight by hurling hot coals at players using wooden spoons (1-4 points damage).


E. Sleeping area
This cave has two dozen grass pallets on the sandy floor. It is a sleeping area for the goblins. At night this cave is empty but during the day there will be 22 goblins sleeping here.


F. Captive
The tunnel to this cave is blocked by a crude wooden gate built by the goblins. The gate door is tied shut with rope. Two goblins stand guard before the gate day and night. Inside the cave is the captive priest Cabrahen. His hands are tied and he is gagged with a cloth. He has been stripped from his clothes and wears ragged shirt and loose-fitting pants. His boots are gone.


Cabrahen is hungry and scared but otherwise unharmed. He can tell players that he spotted the missing calf lying on the ground near the standing stones. Once he approached the calf he found it was alive but has an arrow in its side. He cast Cure Light Wounds healing the calf, which immediately ran away in panic. Just then a goblin appeared and cracked him over the head.  He awoke in this cave. The goblin, who he knows as “Crooked Lip” brought a sick immature goblin to him and made it clear he needed to heal the goblin to stay alive. He cast cure light wounds to restore the goblin but it was clear that the goblin was sick not injured.


He has witnessed some fighting amongst the goblins with regards to his fate. Crooked Lip has defended him from an older goblin he assumes is the witch doctor. A goblin chief also came and argued with Crooked Lip over something in front of the cave bars.


G. Goblin Chief
The chief of the goblins resides here with two bodyguards. He is here day and night when he is not moving about the caves. At night the goblin witch doctor is with the chief. The goblin chief has the treasure of the goblins buried in a shallow pit and the back of the cave. A leather sack with 8 pieces of jewelry worth 400 gold, 25 gold coins and 135 silver coins.


Goblin Hero (1): AC 6, HD 2, HP 12, MV 30’, #AT 1 short sword+1, Dmg 1-6+2, SA NM, ML 10, AL Chaotic. This is the goblin that Cabrahen calls Crooked Lip because he has a scar splitting open his lower lip. Crooked Lip is remarkedly smart for a goblin. He has reasoned the worth of having a living human cleric for the tribe. He has defended Cabrahen against the jealous witch doctor.


Crooked Lip opposes killing Cabrahen but he will fight to keep him from leaving. If the future of the tribe is threatened he can be convinced to let Cabrahen go with players.


Goblin Witch Doctor (1): AC 7, HD 2, HP 10, MV 30’, #AT 1 dagger, Dmg 1-4 +poison, SA NM, ML 10, AL Chaotic. The witch doctor has no special powers. He just believes in the potions and cures the previous witch doctor taught him. None of his potions have any worth and some are actually poisonous. His dagger is coated with poison. Players taking damage must Save vs. Poison or die in 1d6 days. He has a Ring of Protection +1. He is very jealous of the obvious ability of the human cleric and has argued that he should be sacrificed to their god. 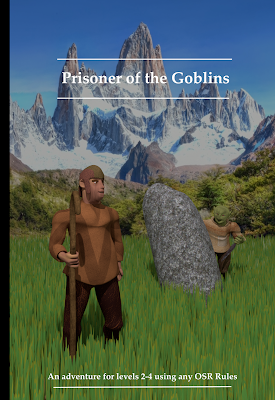