Brognor’s Hall the third level is divided into three areas that are not connected. Each is reached from different stairs from different levels or areas of other levels. In the past, most of this level was made up of the actual sleeping areas for those seeking refuge.

(5). Shudder - the walls shudder and the floor seems briefly unstable. There is a deep groaning noise that comes through the walls.

(6). Sudden Breeze - a sudden cold breeze is felt and lasts for 1 round. Unprotected lamps or candles are blown out, torches sputter but relight.

41. Common Room
Areas 41 to 50 make up the largest secluded section of the level. It was the primary sleeping area for refugees. This room was a common area. There are tables, chairs and a lot of debris. There is a musky, wet odor to the room.

42. Common Temple
A large room, broken wood pews face the east wall. Two tall statues of gods are in the east area of the room. A female god to the north and a male god to the south. Each statue is 12 feet tall and stone. Their aspect is unclear, almost generic.

43. Storeroom
Wooden crates are piled dangerously high in this long narrow chamber. It was a storeroom in the past. The crates near the front have all been smashed open. The contents appear to be moldy blankets and rags. There is nothing valuable in any of the crates. The nearby group of troglodytes searched this area.

44. Sleeping Area
Several wooden pallets are in this area. One of the sleeping areas. The door to the east opens to the east. There is a simple tripwire on the other side of the door attached to a loaded crossbow facing the door sitting on a chair. If the door is opened it is triggered. Firing a single, large iron bolt for 2d4 points damage. It is a simple trap set by the troglodytes.

45. The Cistern
The door opens in. There is a tiny 2-foot platform on the other side of the door in the room that hangs over a large open pit. The cistern is 100 feet deep descending past levels 2 and 1 of the dungeon. The cistern is full of dark, clear water the surface of which is fifteen below the door. An iron spike has been pounded into the surface of the cistern. A rope is attached to it and descends into the water. Green algae coat the walls of the cistern up to a height of five feet above the water level.

Anyone entering the chamber without noting that they are proceeding cautiously needs to make a dexterity check to avoid falling into the frigid water.

Two rounds after entering the cistern six troglodytes break the surface below. They are armed with simple spears and appear to have been fishing for cavefish.

Note that characters falling in the cistern will struggle to stay afloat or fight (-2 to hit).

46. Sleeping Quarters
A former sleeping quarters, it has been taken over by a hunting party of troglodytes. In this room are six alert troglodytes. If they have been alerted to the approach of intruders they will use their chameleon ability to blend into the stone walls and attack with surprise with a 1-2 on a 1d6 (reduced because it is a simple stone chamber with no hiding places).

The troglodytes have created “nests” of old blankets, clothing, and rags. Broken wooden furniture is piled in one corner. Fish bones and scales litter the floor.

Troglodytes (6): AC 5, HD 2, HP 14 each, MV 40’, #AT 2 claws / 1 bite, DMG 1-4 each, SA F2, ML 9, AL Chaotic. Troglodytes secrete an oil which produces a stench that will nauseate unless the victim saves vs Poison. Nauseated characters have a -2 to hit.
47. Sleeping Quarters
Another chamber with troglodytes, this time eight. These troglodytes are sleeping unless they have been alerted by noise in area 46 or 49.

48. Closed Sleeping Area
The door to this area is stuck. Moisture has made the wood of the door swell. It takes an open doors check to force the door. Inside is an undisturbed sleeping area. Six beds footlockers and 3 chests of drawers. The beds are empty and have no sheets, the footlockers are empty and the chest of drawers is empty with the exception of one bottom drawer with 2 moldy blankets.

49. Wash Area
Two troughs are in this area. One on the west wall and one of the east wall. There is a large wooden table in the center of the room. On the table are piles of moldy clothes. There are eight more troglodytes in the room. They are alert. The troglodytes have refilled the troughs with water and poured live fish into them.

50. Latrine
There is a stone platform with a hole in the center in each of the three alcoves in this area. A foul stench emanates from the holes. This was a latrine. The holes open into deep pits.

51. Guardroom
Areas 51 to 56 was a records store in the past. A gelatinous cube is currently trapped in this area by the barred door from area 51. It is ravenously hungry. This area is a former guardroom, two wood tables, and six wooden chairs. A chest of drawers has been pushed across in front of the door from this room which opens inward. The chest is very heavy and difficult to move because the three drawers are full of stone bricks and dirt. If the drawers are removed the chest can be moved much easier.

52. Rest Area
Everything is smashed in this area. There are busted pieces of wood lying on the chamber floor. It looks like it was wooden furniture. Careful examination of the floor will reveal trails of wet slime on the floor with a slight purple tinge. The doors to area 53 swing freely. The latches that kept the doors closed have been smashed like a large, heavy object forced the doors.

53. Sleeping Area
When the characters first enter the area the Gelatinous Cube is in chamber 53. If they make noise or have light, it will slowly move through the doors to area 52 and then follow the characters.

This area is similar to area 52. Broken furniture that was once chairs, beds, and cabinets.

Gelatinous Cube (1): AC 8, HD 4, HP 28, MV 20’, #AT 1, DMG 2-8 + special, SA F2, ML 12, AL Neutral. This cube has a human-sized skeleton inside it, a sword and an ax. Because of this, it cannot surprise victims. A successful hit will paralyze the victim unless a saving throw versus Paralysis is made. Any attack on a paralyzed victim automatically hits. The paralysis lasts 2-8 turns. It is immune to cold and lightning damage.


54. Common Room
There is an intact wooden table against the east wall and three intact wooden chairs in the room. There is a charcoal drawing of a tree on the north wall.

55. Records Room
Broken furniture is scattered about the room. It looks like there was a table surrounded by chairs but it is all smashed now. Paper is scattered on the floor. Most of the paper is wet with a purple slime. On the south wall, there is a wall to wall wooden cabinet of narrow drawers. A few drawers are missing. On top of the cabinet are a dozen candles. Most are white wax but one is red wax and is taller and unmelted. This candle is a magical Candle of Protection from Undead. If lit it casts light in a 30-foot radius. Undead are unable to enter this circle of light. But the light only lasts for 6 turns before the candle is melted permanently.

56. Records Room
There are three tables pushed against the north wall. Eight wooden chairs are pushed under the tables. There may have been other furniture in the room at one time judging by the broken bits of wood on the floor.

57. Guardroom
Areas 57 to 62 was the sleeping areas for the nobility that stayed in the refuge. Area 57 was a guardroom to prevent common folk from wandering into the area. There are tables and chairs and a rack holding 5 spears.

58. Scribes Office
A room full of wooden desks and chairs. Piles of parchment are scattered and stacked everywhere. There are four shadows in this chamber. They appear out of the shadows of the players and attack with surprise on a 1-5 of a d6.

59. Scribes Office
Another scribes office. This one has fewer desks and chairs and has one enormous table to the east side of the room. Again there are a lot of parchments and papers scattered about. The papers detail lists of people, food stores and the like.

60. Hold Leader’s Office
This room is better appointed than any other found in the Hold. A large oak desk sits in the center of the room. A high-backed wooden chair behind it. Three wooden chairs face the desk. Behind the chair are two wooden cabinets (twin doored wardrobes). On the south wall are two enormous tapestries. The tapestries depict angelic beings raising humans up to fight ogres (they are fanciful retellings of two of the early victories against the ogres). Behind one tapestry is a metal locked safe door 1-foot square. Inside the safe is a magical Horn of Plenty (one use per day it produces enough food to feed 120 people).

61. Town Hall
A large room with wooden benches facing a two-foot raised dais against the west wall. The ceiling is vaulted and 20 feet overhead. Clinging to the ceiling is an ochre jelly waiting to fall onto unsuspecting players.

62. Records
The financial records of the Hold were kept in these halls. The central area is honeycombed with many small niches holding rolled up parchments. If it is searched for 10 minutes a single magical scroll of Protection from Undead can be found. 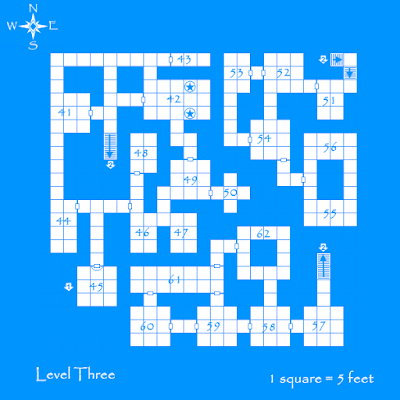