“It can also be found in the very ancient murmurings of the ancients of even the First Age that there was a bird-thing called the Feeniks. It was a creature which was immortal - dying in a burst of flame, then rising up from its own ashes to live again. So say the writings of Garon and Deldayna of Cairn; it also appears as an analog to the prophecies of Narin, who told of the rebirth of the killer of the Riken. Perhaps the world still waits for that might one’s return…
-Monologues of Poule VI”
- Guardian, Thomas F. Monteleone, 1980. 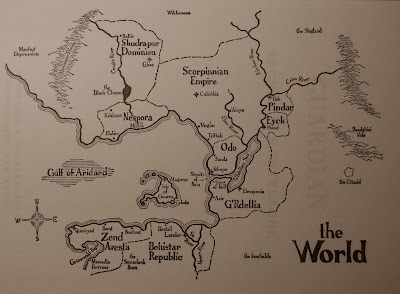 One of the books that influenced my Dungeon & Dragons campaigns the most was Guardian a book by Thomas F. Monteleone. Published in 1980 I can across it in 1982 when I was developing my first game world for a B/X campaign.


The story in Guardian is interesting but not the best. Not even one of the best novels written by Thomas F. Monteleone. The plot is a late middle age or early Renaissance fantasy setting in which a group of adventurers travels the world on a quest to find the Guardian. A super-computer that was a protector of a nation. They are set on the path by an android. The interesting thing about the novel was the map in the front of the novel and the prologue.


The prologue went on for several pages and detailed the nations on the map with a few paragraphs each.


“And so it is possible that Pindar and Eyck shall never be at peace. The claims of rightful borders are always a delicate subject, especially among nations who have a not-very-tenacious grasp of their true self-image. Such is the pitiful state of Pindar, and of Eyck. Neither possesses a governmental system that is much removed from what one might call “musical assassinations.” In fact, one of the perennial political jokes in G’Rdellia a neighboring country of some culture, asks the question: Who’s running Pindar this week?
And since the only viable exports of these two nations may rightfully be termed unrest, hate, and distrust, it is easy to ignore them when considering the general state of the World. Pindar and Eyck are thus the clubfooted stepchildren of a world that is only marginally more fortunate but chooses not to recognize that basic truth.”


The prologue is written in the style of a historical text or not unlike an early game gazetteer. I ended up using some of the details and the basic outline of the game world map. My first game world was a mash-up of the map from Guardian and the map from the Expert rules book. 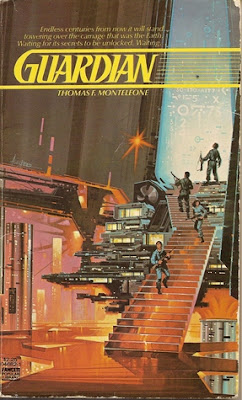 Email ThisBlogThis!Share to TwitterShare to FacebookShare to Pinterest
Labels: BECM