Once More into the Void Session 10

When last we left, the adventurers has entered a narrow passage in the side of a ravine chasing some goblins. They encountered an apparent dead end and some zombies. Above the dead end they spotted a passage high up the wall.

After a quick roll-call and minimal arguing it is decided that Alcor and Talrek should take the lead. Mukah was suffering from several wounds and stepped to the back of the marching order for protection. Both Otrivush and Talrek are out of spells.


One at a time the adventurers climbed up the handholds to the tunnel above. Thyrell managed to slip and fall but caught himself before hitting the water below. With a little help he is hauled up into the tunnel.


Moments later, as the group rounded the first corner in the narrow passage, they are confronted by three goblins. Talrek kills one goblin by crushing it with his hammer. Alcor Fenn impales and kills a second goblin with his spear. The third goblin, turns and runs away.


Running after the goblin, Talrek triggers a trip wire and ice and stone fall from above smashing the dwarf to the floor. An injured Talrek drags himself out from the debris just as more goblins appear and attack. With Thyrell firing arrows from the back, Talrek and Alcor make quick work of these goblins killing all of them. Mukah fumes in frustration from the back unable to get around Otrivush to get into the attack.


With a number of injuries, the adventurers decide to take a short rest in the chamber they are currently in. The goblin bodies and debris and piled up at the exit to provide some protection. After and hour Mukah declares that he is ready to move up to the front of the group again.


Moving down the new passage, we pass what appears to be a goblin latrine or open cesspool in an alcove. Two zombies come around the corner in the passage just as Talrek is advancing. A desperate fight ensues with very little room to move. To make matters worse we are too far from the entrance for the sunlight to penetrate and Otrivush is blind in the darkness. Talrek lights up one zombie with Sacred Fire, seeing the burning zombie Otrivush moves forward to throw Acid Splash at the zombie, he hit but slips and falls into the latrine.

Mukah, Alcor and Talrek manage to hack apart the two zombies. Otrivush drags himself out of the latrine and is faces endless jokes from his heartless fellow adventurers.


Ahead in the passage, a light glow can be seen. Apparently from a flickering light source. Talrek hears goblins conversing but it is too faint to make out what they are saying. 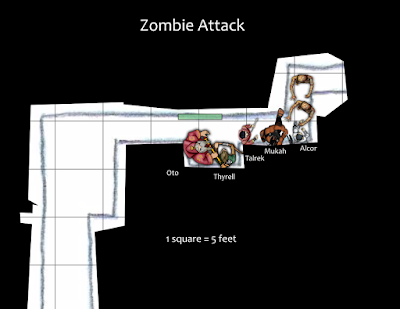 Alcor volunteers to edge forward and scout out two rooms that the passage enters. To the north is a chamber and a door. To the south is a number of goblins sitting near a human corpse and a small fire set in a human skull. Just as Alcor spies on the goblins he slips and stumbles alerting the goblins. The goblins jump up and grab their weapons.

Email ThisBlogThis!Share to TwitterShare to FacebookShare to Pinterest
Labels: D&D 5th Edition, Once more into the Void