One of the images that really captured my setting concept for Stars without Number Wolf Sector was the image from the box of my old Star Smuggler microgame. I made a first attempt to capture this image in blender. The result is the Chincara class trader. In the game Star Smuggler your ship is the Antelope. But I have already used that name. So I picked something similar.

The Chincara class is one of the many workhorse traders that first re-opened Wolf Sector to trade between the planets. Built by Guo Jin-Ri Shipyards on Touchdown it has gone through many upgrades and design changes over the years. The one shown here is the Mark IV which is still being produced at the current date of 3200. This despite being limited by spike-1 drive engines.

Earlier variants of the Chincara were sleeker with a classic triangular shape. Cargo hold expansion followed in Mark II to accommodate the bigger M-Class containers (2). Trader captains hauling the additional weight found the Mark III was difficult to handle in anything but serene atmospheric conditions. The Mark III took care of this problem with the addition of enormous wing extensions that give the Chincara additional lift. The landing problems were solved and the Chincara is perhaps the best landing performing trader in the sector. Unfortunately, the wings also added mass and the jump engines were not updated. The results have been best described by one captain as “wonky” spike jumps. The latest version made minor updates to electronic and computers in an attempt to help with these problems but the original spike-1 engines still limit the effectiveness of the spaceship. 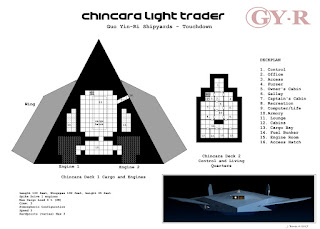 Cargo loading is done from underneath. The large loading tray is big enough to load an M-Class container on its own. Inside the ship and overhead crane unit can position containers. Only 2 M-Class containers can fit safely in the Hold.

I made an attempt to mimic the image from the Star Smuggler box. Below are the results. I imported the box image to get the dimensions of the stern correct and then freelanced the rest of the ship as there are scant details in the game. I suspect the game ship concept is a great deal bigger since the ship has a full, triangular shaped landing craft onboard. The model only took a few hours.  It took much longer to get the planet to look like anything. In the future I will hopefully get better at this. The image texture of the planet came from a random planet generator online.