Hit Points in Stars without Number

As I mentioned earlier I am not a fan of the Hit points increasing with level in Stars without Number. Levels and hit point increases bother me in every game system other than rules designed for Fantasy role-playing games.  Likely, because the Fantasy level concept has been part of my gaming from the beginning. And the adversaries in Fantasy games increase in level and it does not seem odd.  Although I can still remember having players more bored than challenged when confronted with dozens of orcs when they were at 8th level in AD&D.

With only one read through the rules for Stars without number I am probably only seeing the big picture and not the details.  So I have to be careful before House ruling static hit points because it is a cornerstone rule and could really disrupt things.  Aside from the obvious like adversaries, the increasing hit points would also be designed to counter more powerful weapons.

Online I have seen a few suggestions. Like have Experts/Psychics use 5HD and Warriors 6HD.  All adversaries encountered would be similarly increased.  Another idea was to make hit points equal CON and add only 1 or 2 more hit points per level increase.  A warrior might then hope to have a CON of 14 and by level 5 he could have 19 hit points or even 25 if I went with +2. This idea has some appeal.  I think the adversaries could likely stay as written in the rules. The increase in HP would not be overpowering.

To test out how this Combat might look I have the following scenario.  Our intrepid hero Duke is wandering the alleys of the port city of Harwel looking for a shop that sells cheap body armor.  He makes a wrong turn and ends up in a dead end.  Turning around he finds the alley entrance is blocked a leather clad street punk named Billy.  Billy is pointing a primitive rifle at Duke, “Give me all your money, spacer!” 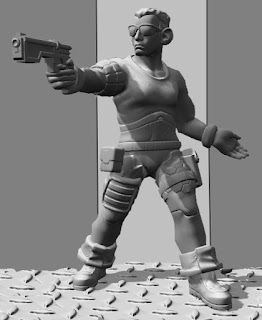 Now a few years later Duke again finds himself on Harwel.  Out to stretch his legs after a month in space.  Again he is confronted in an alley.  This time by Tommy a similar street punk.

But Duke has been adventuring and has reached level 5 he rolls 5d8 for hitpoints and likely has about 27. Also he might have woven body armour (AC4) from his adventuring profits. He has spent skill points on Projectile weapons and is at level 2.  So he attacks at +6 (+1 DEX, +2 Skill level, AB +3).

So it still seems okay.  Duke is still at threat from the street punk who is still level 1.  Assuming I have done this correctly.  So it might not be as big a problem as I thought.

If I adopted the CON based hit points idea, then at 5th level Duke would have only 14 hit points.  That also looks like it might work.  I think this might be more noticeable at high levels.  Levels like 8 where the hit points are 8d8 and likely giving hit points in the 40s.  Meanwhile if I based it on CON he would still only have 17 hit points at level 8.

There are some really powerful weapons in Stars without number that would pose problems for a CON based hit point rule. The spike thrower does 3d8 damage and even the Mag Pistol (which is not expensive) does 2d6+2 damage.  You can see in the above example that Duke did 11 and 13 damage.  If Duke was hit by a weapon like this it would be 1 or 2 shots to kill him.

Email ThisBlogThis!Share to TwitterShare to FacebookShare to Pinterest
Labels: Stars without Number