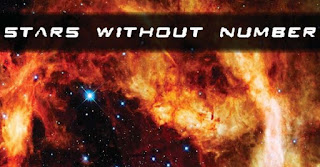 I have been thinking of running a space opera style science fiction game.  I have a lot of options to choose from for rules. The first that sprang to mind was “Stars without Number” (Sine Nomine 2010). I have had it for a while.  Since it is a quiet weekend I browsed through the rules today.

Here are my scribbled notes...

Setting
The time stamp is 3200 AD. Humanity is scattered.
In the past psychics were employed to operate instantaneous stargate.
In 2665 (565 years ago or 20+ generations) the Scream occurred, a psychic pulse that killed all psychics. Jump gates became inoperable, travel was only possible by old spike drive ships.
The dark ages that followed were known as the Silence.

Step 1: Roll up the six attributes using 3d6.  You can move points between scores, lowering those above 13 and raising those below 8. No modifications can raise a high score below 13 or a low score above 8.
STR - physical might. Good for melee combat.
INT - memory and logic, technical skills.
WIS - perception, willpower and judgement. Aware of your surroundings.
DEX - hand-eye coordination, agility, reaction speed.
CON - stamina, ability to withstand pain.
CHA - charm, leadership.

Step 4: Choose a Homeworld.
Use the Hydra sector for a homeworld.  Note that psychics must have gone to an Academy at some point in their past.

Step 6: Choose languages.
You speak Pan-Galactic, your world’s native language if different, and one more language per INT modifier.

Step 8: Psychic class chooses disciplines.
Primary discipline begins at level 1, 1 more point to spend on another discipline. Initial psi power points are equal to 1 plus the highest attribute modifier of either WIS or CHA.

Difficulty Number
<6 are routine and not worth rolling.
6-7 are easy difficulty.
8-9 are average difficulty.
>10 are challenging feats.

Psionics (25-32 7pp)
Powers are divided into disciplines each of which has nine level. They must be learned in order.
Psi powers can be used at any time during a character’s turn but only once per turn. Using a psi power counts as the character’s action for the turn. Automatic powers do not count against these limits.

A psychic can choose to Master a power permanently decreasing their psi points. The advantage is that thereafter the power has zero activation cost.

If a psychic is out of psi points he can draw on their neural reserves in a technique called torching. It causes permanent damage to the psychic but can power any level of discipline. This can lead to “feral” psychics.

Generally a psychic must see his target.

Starships
Spike drives use a fusion plant to bubble the ship up through ever-increasing dimensional frequencies where normal physics do not apply. The ship rides the energy created by a dimensional shear to fly faster than light.  Drilling out to higher dimensions is only possible at the rim of a solar system away from gravitational pull. Within systems a starship can still use the spike drive to phase out but not completely.

Skills - roll 2d6, add skill level and attribute modifier. If the total equals or exceed the check’s difficulty number it is a success.

Opposed Skill checks
Both characters make skill checks. The largest result wins. Ties are re-rolled if a tie result does not make sense.

Extended Skill checks
A single check might not sufficiently represent the task. In this case several skill checks might be needed.

COMBAT
Combat is divided into rounds of about 6 seconds each. During each round every character gets a turn. During a character’s turn he may both act and move up to 20 meters. A character can give up their action to move an additional 20 meters.

Initiative
Every participant rolls 1d8 and adds their DEX modifier. Initiative is rolled once per combat. Characters can delay actions. In ties, the character goes first.

Attack
Roll d20 and adds the relevant combat skill, the attribute associated with the weapon, target armor class and the attack bonus for class and level. If the total is equal to or greater than 20, the attack hits successfully. A natural 1 fails, a natural 20 hits.

The target’s DEX modifier is subtracted from their base armor class.

Damage
If an attack hits the character rolls damage dice associated with the weapon. You do not add ability bonus to damage.

Movement
Characters can move freely around enemies with ranged weapons but if a character has engaged an enemy with a melee weapon his opponent gets a free attack without spending an action if he tries to move away (exception is fighting retreat).

Saving Throws
Made by rolling d20 on the class table. Some situations may give a choice of saving throw to use.

Hazards
Vacuum Exposure first round does not damage. Each round after does 1d20 points of damage.
Falling does 1d6 damage for every 3 meters fallen.
Radiation exposure requires a Physical Effect save. On success there is no lasting damage. On a failure no immediate damage is noted. But the next day the character will lose 1 point of CON and suffer radiation poisoning.  Most severe radiation exposure requires 1 save per day but more lethal exposure require more saves.
Suffocation, characters can go without air for 4+CON minutes. Once they are beyond their limit they must make a Physical effect save or pass out.
Xenoallergies are caused by alien microorganisms. Most alien microbes are harmless but some cause allergic reactions.
Disease and Poisons are measured by Toxicity rating, an Interval at which they harm the character and a virulence indicating the number of saving throws needed to recover from the effects.

Healing
Natural healing is number of hit points equal to character level per day provided they get 8 hours of rest. If he spends the entire day resting it is 2 hit points per level.  He can also gain an additional 2 more for every level of Tech/Medical possessed by an attending physician.

Gaining Hit points
Re-roll hit points at the new level.  The total cannot be lower than the previous total.

Gaining Skill points
Gain skill points as per class. Skills need to be trained by an appropriate trainer.

Gaining Psi Disciplines
Psychics going up in level may add 1 to their primary psi discipline and 1 point to any other discipline. They also gain additional Psi power points of their class table.

Navigators can “trim the course” but it comes with dangers.

Travel in a system requires Navigation-0 skill and usually no checks. Making a jump to another system requires at least Navigation-1 sill and a successful Navigation/INT skill check against difficulty 7. A spike drive cannot drill more hexes in a single jump than the rating of the drive. A failed check results in a roll on the Failed Navigation table.

I have not taken a hard look at the rules yet.  Some rules sections I just skimmed and did not take notes. It seems like a curious mix of Traveller and D&D.  I almost feel the ascending hit points with level is a show-stopper.  For modern/future games I prefer that the characters begin close to maximum vitality.  I cannot work my head around why a more experienced character can suddenly shrug off blaster hits.  I realize that hit points are supposed to represent fatigue, ability, stamina etc. but it just feels weird.

Also I think it might be a problem that the rules really assume human characters.  It is possible to play aliens but the rules are not really ready for that and few examples are in the base rules (basically 2 playable alien races).  I think my players might not like the lack of options.

I do really like the setting concept. It makes the system useable for all sorts of campaigns and I see that there are published rules for a variety of options.  Campaigns like military, mercenary, spaceship combat, cyberpunk,  star trader and espionage.

There are extensive rules for developing star sectors, worlds and adventure campaigns and a lot of online resources, character sheets and the like.