Something different, a book review.


I spotted three books by a Space Opera favorite, John Brunner (1934-95) at a Used bookstore a few weeks back. With all of the writing I have been doing on Stars without Number it seemed a perfect time to read 1960’s Space Opera fiction.


The first book I opened, titled Interstellar Empire, was actually a novella and two short stories. I just finished the novella and it is really appropriate background information for Stars without Numbers and the setting for the game. 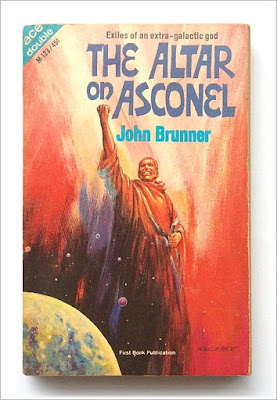 The novella is, The Altar on Asconel, (originally The Altar at Asconel in If Magazine 1965). The setting is in the far future as the Human Galactic Empire is falling (Terran Mandate) and concerns the planet Asconel. Asconel has been out of contact with the receding Empire for generations but it is one of the few bright lights in the sector. The government of the planet is controlled by a Warden. The Warden was appointed by the Empire at one time but now has become a hereditary position. The Warden has recently died and his son takes power. The other 3 younger sons (two brothers and a half brother) decide to leave the planet to prevent any possibility of civil disruption.


Ten years later the hero of the story, Spartak, is a scholar on a primitive planet that was a knowledge center of the old Empire (Preceptor archive). His space mercenary brother arrives in a spaceship and tells him their oldest brother, the Warden, has been killed and replaced by an usurper who controls the population of Asconel. Their brother had taken up the company of a powerful psychic and she betrayed him to the usurper. The brothers set off to win back Asconel. First they go looking for the remaining brother on an Empire outpost planet called Delcadore that is nearby. They find their brother but the are also forced (mental compulsion) by the government on this planet to take a psychic into exile. In this book the Empire exiles mutants and psychics to the rim worlds. After convincing the psychic that they mean her no harm, she finds a way to break their compulsion and it is on wards to Asconel. I will not spoil the rest of the plot.


In the book the attitudes towards mutants and psychics is examined. The Empire has a tradition of exiling them but on world’s cut off from trade they are usually stoned to death. The concept of a Galactic empire that has fallen is explored. Some planets are holding on to modern devices and trade while others have fallen into barbarism. It is good background material for Stars without Number.


One difference from Stars without Number is that the spaceships are immensely old. Humans when they first discovered interstellar travel encountered a stockpile of alien spaceships from an older civilization that had vanished. They discovered how to operate them and set out for more systems and found more and more stockpiles of ships. So no new ships were built. By the time of the book the star ships are 20,000 years old.  On Delcadore they see an impressive fleet of thousands of star ships of the Empire but on closer examination they realize it is a field of thousands of scrapped ships cannibalized for parts.

Recommended read for Stars without Number Gamemasters.
Posted by tegeus at 16:10