I am going to post the Adventure I wrote to start two Harn campaigns (1995, 2001). One used the RuneQuest III rules and the other used the Harnmaster II rules.  I think I will post with the RuneQuest rules.  Retyping the adventure and creating the maps has taken a little more time than I anticipated so I will post it in a few installments. For the first installment is the North Road Inn where the adventure begins.

The North Road Inn is a large, country Inn located on the outskirts of civilized lands in Nuthela.  The Inn is the major attraction on the Fur Road of the thran of Taryn.  Taryn is a small thran hold of 60 Jarin under the sway of the Ivinian clan chief Idgel Isselsson who pays sometime tribute to Lorkin.  The Jarin population of Taryn makes ends meet by providing services to merchants passing along the Fur Road to Lorkin and Lerial.  The valhakor is supported by a garrison of 8 Ivinian soldiers to deal with any trouble.  The local barbarian tribes are Taelda and get along well with the village folk.  Taelda are often seen in Taryn trading for goods.
The settlement was troubled with gargu-kyani raids from Bwaft in the spring months until the arrival of Idgel four years ago.
Nuthela is a barbaric unsettled region of Orbaal.  The adventure provides an opportune place for adventurers of different backgrounds to meet and journey on together.  Depending on their cultural background adventurers are likely travelling north or south on the fur road to see the world or have come out of the wilderness to trade with civilization.


About 20 years ago, The Jarin of Orbaal raised up against the Ivinian conquerors in a rebellion.  This rebellion was the most successful in the Lorkin region where Castle Lorkin was taken by rebels.  When Gweffryn the Jarin rebel leader was mysteriously beheaded at Lorkin the rebellion was quickly brought under control and the Ivinian retribution was both swift and vicious.  One of the Jarin rebel soldiers fleeing Lorkin was Vallus.
Fleeing south for Kaldor along the Fur road, Vallus took up company with a small late-spring caravan bound for Tashal.  The caravan came under attack by a band of garu-arak from Ejatus and all but Vallus were killed.  Although badly wounded, Vallus managed to crawl into the underbrush where he was discovered by Taelda hunters.  The Taelda took pity on Vallus bringing him to a Taelda witch known as Dania.  After remaining with Dania for a full year recovering from his wounds the two were married by Jarin custom and Vallus set about building the Inn on its present site.
Over the years more craftsmen have come to the site to service caravans and travellers on the fur road as well as to trade with the Taelda.  The local Taelda are friendly with the people of Taryn mainly due to the presence of the Taelda witch Dania who is greatly respected among the Taelda for her healing powers.
In 716 TR, an Ivinian cousin of Taarbri Geldestaar, Idgel Isselsson arrived with a small force of clanless Ivinians to claim the area for clan Geldestaar of Lorkin.  This was done with the approval of Taarbri but Idgel has been slow with payments of tribute and his position is secure only because he is isolated from Lorkin.  The Jarin  Prince of Lerial considered the area along the Fur road to be part of his fief but has not made any claim to the area since the power of clan Geldestaar backs Idgel's claim.  Those Jarin who made a living farming the land have either fled or been forced into serfdom.  Some Jarin craftsmen remain freemen, especially Vallus the Innkeeper who is the wealthiest man in the thran.  Idgel taxes the freemen of Taryn for the right to live on his land.  There is considerable Jarin discontent in the village and Idgel has been careful not to make his taxes ruinous, for fear of sparking a revolt.

The Inn consists of a palisade compound with the two-story Inn and barn.  Both structures are built with a wooden structure and insulated walls of mud and straw.  The roofs are built of thatch and wood.  The Inn has an impressive stone floor in the main room made from local limestone.  Twin wooden gates block the compound and are barred at night.  The palisade is only six feet high and is not much of a deterrent.  The Inn yard has hitching post and water trough under the shade of an old maple tree that sits in a boxed planter.  There is an entrance to the cellar for provisions and back door leading to the outhouse as well as the porch to the main front entrance. 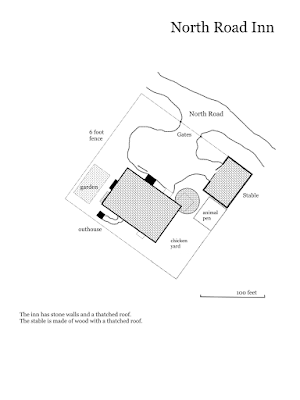 Stable
The stable is the province of Ceno the stable boy and son of one of the local farmers.  Ceno stables horses without question or mention of payment but will inform Vallus of any occupants of the barn (see price list).  Ceno is 14 and ready to see the world outside of Taryn.  He especially wants to see civilization and eagerly listens to travellers from Kaldor for news of the wider world.

The Inn main room is floored with stone and has a layer of straw thrown over it for easy cleaning.  There are two long tables with benches and a small table surrounded by stools.  Barrels of mead, ale, brandy and apple cider reside on and behind the wooden bar.  The room is lit by 4 oil lamps at night and by the six second story windows during the day.  It is large and airy for Inns of Orbaal.
The kitchen has a stone brazier for cooking and a pallet where Ceno sleeps.  The stairs down lead to the cellar where wood and kitchen supplies are kept. The average rooms contain a wooden bunk-bed with straw pallets and a wooden floor storage box without lock.  The two quality rooms contain a large wooden bed with goose feather mattress and a wooden lockbox.  The common room is upstairs and consists of a wooden floor with straw pallets on the floor.

In the common room their is a small wooden lockbox with 140 pennies in it.  Also behind the bar are hung various Taelda carvings and animal furs traded for service. 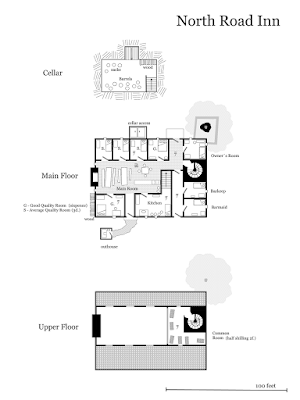 
Vallus keeps an iron-shod lockbox in his room with fine clothes in it, his suit of Ringmail armour, iron helm and sword.  Also the wealth of the Inn in a wooden box - 1200 pennies.  Vallus grew up in his father's Inn near Lorkin, and took a leading role in the Jarin rebellion after his father's Inn was confiscated and given to an Ivinian clansman.  He still dislikes Ivinians, but age has tempered his anger and he will not take up arms against Idgel unless forced.