The Village of Taryn

Part two of an adventure I am posting that uses the RuneQuest III rules and takes place on Harn. This time I detail the Jarin village where the North Road Inn is located. 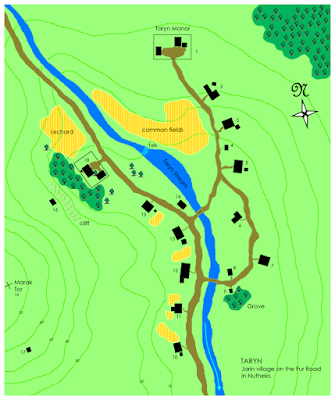 THE THRAN OF TARYN

1.  ISSEL MANOR
(Idgel Isselsson) Ivinian
The manor house consists of a compound surrounded by a wooden palisade. In the compound is a single story wood lodge style manor, wooden stable and attached mud and wood garrison. Idgel
the Lord of Taryn lives here in the lodge with his wives Marela and Tallia, his son Homb, and two Jarin thralls, Aethly and Makas.  The garrison holds the eight Ivinian guardsmen that came with Idgel to Taryn.   Idgel claims the common land near the river and it is farmed by local Jarin.

2. WOODCRAFTER
(Maras of Caryw) Jarin
Maras is an average quality woodcrafter, serving the thran’s needs.  He built most of the wooden lodges in the thran except for the Inn.

3. MILLER
(Uthaed of Llyrol) Jarin
The mill has an Oxen powered grindstone set partially under an overhanging roof.  Uthaed makes much of his profit by selling grain to the Taelda for furs.  His wife Feclka is a Taelda.  He has 3 sons in their low teens who spend much of their time off with Taelda hunters much to his concern.

4-7 & 15. FARMERS
These Jarin farmers pay a portion of their crops in tax and to use Idgel's land.  The small amount left over is for their own profit.

8. HIDEWORKER
(Ongdu of Stanlyn) Jarin
Ongdu buys furs and hides from his brother Ondag to make into clothing he sells to travellers.  He is married to Leria and has one daughter and two sons.  The daughter Martha works at the North Road Inn.

9. SHRINE OF ILVIR
Three large Oak trees shade this square limestone block carved to represent Ilvir as a many-headed serpent.  Their is a blood-stained stone bowl for offerings in front of the stone block.  All Jarin in Taryn are followers of Ilvir and sacrifices of goats are common, especially since the arrival of Idgel.

10. WEAPONCRAFTER
(Tyn of Shese) Jarin
This small lodge has an attached outdoor forge with two-walled windbreak and wooden overhang.  Tyn the weaponcrafter lives here with his two sons Barra and Jellas who assist him at the forge.  He does not talk about the whereabouts of his wife who died in the Jara rebellion.

Normally a thran of this size would have little need for a weaponcrafter but Tyn makes a good business selling (covertly) to the Taelda and repairing caravan guard weapons and the Ivinian garrison weapons.  Tyn is a Jarin patriot and ensures the quality of his work for Ivinian customers is low.

11. SALTER
(Eldas of Tawheim) Jarin
Eldas salts the meat brought into the thran by Taelda hunters, passing caravans and slaughter of the thran’s goats.  He is aided by his young wife Gaywien and his sister Arweth. Arweth is an unattached Jarin hunter of age 20 and has several Jarin suitors.  She has also attracted the unwanted attention of one of Idgel's guardsmen.

12.  PROVISIONER
(Wyllam of Setrew) Harnic
Wyllam is a recent arrival in Taryn, and he lives in the largest house in the thran (aside
from the Inn).  The 2-story shop/home has a stone bottom floor shop and wooden 2nd floor living area.   He supplies the caravans, travellers and some Taelda with provisions of all types.  The Mercantylers Guild of Tashal pays for him to operate here, and he receives regular shipments from them.  He is assisted by his wife Miram and his son Bokkas.

13.  FURRIER
(Ondag of Stanlyn) Jarin
Ondag is a big, fierce ugly man who is a close friend of the Taelda tribesmen.  His wife Allawyn is Taelda and his son joined a Taelda tribe.  He trades salt, beads and grain to the Taelda for furs which he sells to his brother Ongdu.

14.  HEALER
(Jareth of Methews) Jarin
Jareth is an old Trehaen from near Lerial who now works out of this unkempt shack as a healer (First Aid 90%).  He has a nasty scar that extends from his missing left ear to his chin.  He became the hero of the thran when he prescribed a healing balm with an added ingredient to give a painful rash when Idgel caught a cold after falling into the river.
16.  OSTLER
(Toomka) Taelda
Toomka lives in a small hut precariously balanced on Marak Tor above the thran. Toomka is a civilized Taelda of 15 years who looks after the thrans many goats, handful of sheep and two cows.  He also handles any veterinary problems with the miller's ox and caravan animals.  Toomka was an orphan adopted by the former Jarin ostler who passed on 3 years ago.

17.  HERMIT
(Odd Thom) unknown origin
Not much is known about Odd Thom, a wizened old man who lives high on Marak Tor.  He is of indeterminate ethnic origin possibly Harnic.  Since the ostler's death Thom has looked after and instructed Toomka.  Although an aged man he is tougher than he looks as a passing caravan  guard found out when Thom knocked him unconscious for forcing Toomka to look after
his horse.  No one but Toomka saw how the old man dealt with the young Harnic warrior.


More details of the Inn that the thran is built around are given in the previous post.