Holidays so I am on the road. I decided to write up an encounter based on an oil painting my mother did a year ago showing a dragon demolishing a cliffside structure.

It does not fit perfectly into the Stillwater further afield outdoor sandbox map but I think I can fit it into hex 0903. In this location is an outcrop of rock called the “Severed Tip”. A 1500 foot tall spire of rock rising up in the Talenwood. The rock outcrop looks to be finger-like except it is cut off at the knuckle.

The Dragon’s Lair (hex 0903)
When people talk about “the dragon” in Stillwater valley they are referring to the old dragon who resides in tunnels carved into the side of the Severed Tip. The dragon has been a legend in Stillwater valley for as long as anyone can remember. Historians and sages say that the dragon took possession of the tunnels more than 300 years ago. At the time the tunnels were the monastery of a sect of monks of the god Ecix. The dragon forcefully evicted the monks and moved in. The dragon is occasionally a menace, going on month-long rampages, every few decades. There does not seem to be any pattern to the beast’s behaviour. The dragon has been sleeping quietly in his lair for the past seven years.

Reaching the Lair
The monks of Ecix were a reclusive group of scholars well known for their peaceful ways. They chose a very remote location in the wilderness to build their abode. The tunnels that the dragon now lairs in are built into the side of a cliff on the Severed tip at a height of 1100 feet. Access is possible by an overgrown trail to a location 200 feet below the entrance in the cliff face. To enter the monks used to let down a basket. The ropes, crane and basket are long since gone. Characters will have to scale the cliff face (or fly) to reach the entrance. A second entrance is possible in an opening above one of the interior chambers. The broken remains of a statue of Ecix (a bald, robed man with a look of contemplation) lies in the dirt at the base of the cliff. 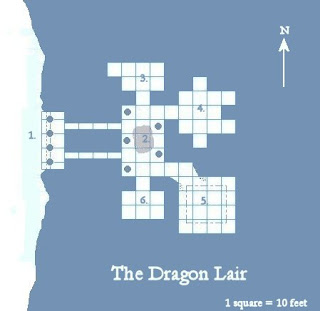 Area 1: The Cliffside entrance
The entrance is an elaborate column and lintel facade carved from the mountain and faced with marble. Some of the marble has crumbled and fallen to the ground. One of the columns is broken off 3 feet up from its base. The dragon smashed the column as he chased the monks who survived his original attack. The entire facade is forty feet wide and forty feet tall. At its back are two narrow passages that lead to the main hall.

Area 2: The Temple Nave (Hall of the Dragon)
This is the largest chamber in the tunnels. An 8 foot tall statue of Ecix was against the east wall at one time. The dragon kicked it off the side of the cliff. The chamber is huge, with a 30 foot tall ceiling held up by five stone pillars. Colorful tiles decorate the chamber walls but they are blackened by fire. The tiles are arranged in geometric patterns. The dragon sleeps in this chamber on a mound of what it considers treasure. This is a 30 foot long pile of bones, cloth, broken wood and a fair share of gold, silver and copper coins.

The statistics for the dragon are left to the Gamemaster to develop as appropriate for your campaign. I would suggest that the dragon is a made a formidable monster that is a legend in the setting that players are always aware of and can aspire to confront. The dragon is getting on in years and can sleep for months without stirring (especially after a rampage). But its senses are still sharp. It can smell food (adventurers) that come within 100 feet of its lair and will be roused from sleep. The dragon has chosen this lair for the final sleep so it will fight to defend it to the death but it is not suicidal. The dragon would be willing to bargain if confronted with adventurers that it fears could kill it.

Area 3: The Kitchen (Northern Chamber)
To the north of the large hall is a debris filled chamber that was once the kitchen of the monastery. The alcove to the west is a stove with a chimney leading out to the cliffside (it is only 1 foot in diameter). A few of the monks died in this chamber. Their skeletal remains lie on the floor near a fire charred wooden table that was pushed on its side. There is nothing useful in this chamber.

Area 4: The Sleeping Chambers (Southern Chamber)
The monks slept in this chamber. All slept in equal wooden bunks. The lowest acolyte sleeping in a bunk beside the leader of the monastery. Most of the monks died in this chamber. A scattering of 10-12 blasted skeletal remains are scattered amongst the ruins of charred bunks. The former leader of the monastery remains as an embittered ghost. Long years of unrest have driven the monk (Brother Gitte) mad with anger. He wants the dragon to die but does not have the power to confront the beast. He will try to possess characters and attack the dragon without concern to the damage the possesed body takes.

Area 5: The Garden
The monastery had an outdoor garden and place of contemplation maintained by the monks to provide for their food. The area is 40 feet square. The walls are carved from the rock of the mountain and most of the ceiling 20 feet above the ground is removed allowing the sun to shine into the chamber. The floor of this chamber is covered in a deep layer of soil. The area is overgrown with bushes and small trees. There is a rough path crushed through the plants where the dragon lands and lumbers into his chamber. The tunnel to the Dragon’s hall is smashed from the dragon’s passage (he is no longer as slim as when he first moved in).

Hidden in the debris is the body of a famous warrior who challenged the dragon from lower down on the mountainside path. The dragon swooped down and chomped down on the warrior carrying him up to his lair. The dragon dropped the warrior’s corpse when it found it could not peel off the warriors armor to get to the tasty part. The warrior is wearing surprisingly intact magic plate mail armor (+2 or equivalent) and still clutches a magic longsword (+3 dragonslayer or equivalent).

Area 6: The Scriptorium
The “treasure” of the monastery was their unrivaled (for the area) collection of historical and magical scrolls and books. They were carefully cared for in this large chamber. The alcoves were individual study chambers for each senior monk. The dragon unleashed a blaze of fire into this chamber destroying most of the paper stored here. The initial blast of dragon flame destroyed a lot of the books but the subsequent fire burned for hours and destroyed what was left.

In the center of the chamber is the charred wreckage of several large tables and chairs. Some bits of paper still remain. The walls of the chamber are lined with the wreckage of wooden shelves and charred bundles of paper. The alcoves contain burned desks and shelves. The lone alcove to the north escaped most of the fire and the desk is fairly intact. If the 4 drawers beneath the desk are forced open (they were warped by the fire) a number of scrolls and books will be found intact.

I might detail the books found in a later post. Or it can be up to the individual gamemaster. Depending on the challenge offered by the dragon this could be a great way to offer the characters an appropriate reward. The adventurers could also be drawn to the dragon’s lair by rumours that a valuable magic book resides in its ruins.