One interesting sector in my Wolf Sector Stars without Number campaign setting is sector 0504. In this sector there is a planet called Limbo orbiting around the core of the galaxy but no star.

This is entirely possible and recently telescopes have found so-called wandering planets, in some cases they are actually brown-dwarf stars that never formed. 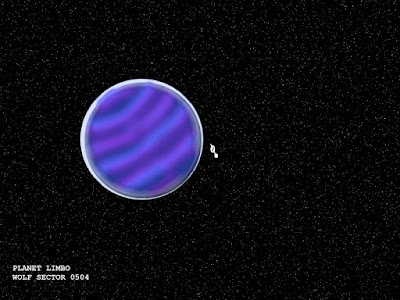 Limbo is a massive hydrogen gas giant formed around a nickel core. The planet’s outer atmosphere is blue through purple bands of gas. It was discovered by chance in 2320 at the beginning of the stargate era. The vast amounts of hydrogen made it an ideal stop for spike drive ships and it fueled a local stargate which served the entire Wolf Sector.

The location of the stargate also brought a Psionic Academy to the space station that orbited Limbo. After the scream the psionic inhabitants of the space station died or went insane. The other inhabitants were faced with isolation from other systems and no influx of supplies. The station descended into madness as the survivors fought for food, power and water.

Eventually, new psychics rose up and were able to use the training facilities and libraries to successfully train and hone their abilities. A society controlled by the most powerful psychics took form. A police state formed with the psychic families at the top of the structure careful to control the breeding to produce more powerful psychics. Having psychic ability was automatic invitation to the local royalty.

Spike drive ships looking for fuel arrived from Touchdown in 3120. They found a small population of 2,500 people controlled by five families of psychics. The arrival of outsiders set off a rebellion that lasted 3 years. In the end a Free Council took control of the station and the psychics lost most of their political power. They are still careful to limit invitation into the Five Families and enjoy privileged status.

Ships now pass regularly by Limbo. There is a steady stream of supplies coming in and the station sells Hydrogen fuel to passing ships. The Five Families also operate the only Psionic Academy in Wolf Sector (Celestial Psionic Academy) where psychics can come for training at a price.