Last month I posted a Runequest III on Harn adventure called "Ransom".  This month I decided to post the sequel I ran in a campaign back in 1996. I had to do a quick rewrite of the adventure because a number of things were unique to my campaign.

In my campaign the part of Miri was a player's character joining the campaign. The player's original character drowned in the cavern of "100 Bushels of Rye". So the player's traveled to Olokand and met the new character. I left it up to "Miri" to figure out how to meet the other player characters.

If I recall the heist came off pretty well when I ran it.


A RuneQuest adventure setting on Harnworld.
A sequel to Ransom
by Jeff Bowes - January 1996
Revised - February 2017

GENERAL INTRODUCTION
The Heist is designed to be a sequel to the events which occurred in the adventure Ransom.  In that adventure Dabin of Crasele set up the players to take the fall in a double-cross involving a ransom drop near the town of Olokand. This adventure reintroduces Dabin and allows the players to exact some revenge.


PLAYER INTRODUCTION
Miriamele (hereafter called Miri) is the daughter of a mercantyler from Kiban who has travelled throughout the Kald Valley as a peddler and thief.  For the past year Miri has worked for
Dabin of Crasele as a bookkeeper.  During this time she has also worked for the Lia-Kavair by passing on information to them about the departure and arrival times of valuable cargoes of goods. Miri is now growing restless and dissatisfied with life as a dishonest bookkeeper and wants to make a bigger score.


Miri is planning to rob Dabin of one of his shipments and pocket the wealth herself without the help of the Lia-Kavair.  To do this she is going to need some help and she knows some individuals who have a score to settle with Dabin, and just might be interested.


GAMEMASTER BACKGROUND
Recently, a trader named Birsen who frequently gets financed by Dabin received a commission to purchase some of the prizes for the Chelabin Tourney of Honour.  A financially troubled Dabin saw this as an opportunity to make a lot of money.  So rather than lending money to Birsen, Dabin has become a partner in the venture and has supplied all of the financial backing. Birsen has travelled to Kiban to purchase Khuzdul-made jewellery and has sent word his trip was successful and he will be back within a few days.


Dabin has become paranoid about the secrecy around this delivery so he has publicly told everyone that Birsen will arrive overland by cart coming up the Kald River Trail. Actually, he expects Birsen to arrive by riverboat and has arranged for a customs agent to meet with him at the docks.


AN IVINIAN PAL
This is an optional encounter to plague the adventurers with if they are particularly wealthy and need to have their wariness tested. Unknown to the players, an Ivinian thief named Luven is stalking them and is looking for an opportunity to get into their confidence.  Once in a position of trust he will make off with as much silver as he can lay his hands upon.  Luven is from Harbaal, and is the son of woodcutters.  He travelled to Harn in search of wealth and adventure and has had some of the latter.  He was born in Gosheim in the Kingdom of Elgos, but is not a member of clan Gos.


THE HEIST
This part of the adventure deals with the actual planning and carrying out of the robbery of Dabin of Crasele.


EVENT 1
MEETING WITH MIRIAMELE
As a journeymen mercantyler (scribe) Miri makes 10 farthings a day plus lodgings.  She pays for her own meals and supplies.  Miri works from dawn to dusk everyday except Soratir (Larani lay mass), which occur once per ten-day.  She has managed in the past year of work to save up 40
silver pennies, because she sells information to the local Lia-Kavair.


Recently, Miri learned that Dabin was investing a sizeable portion of his wealth, (1500 d.) into the purchase of Khuzdul jewellery as prizes for the Chelabin Tourney for Sheriff Maldan Harabor.  Dabin was even forced to get a loan from Tinel of Portin of 500d. To come up with the money.  The money was turned over to his agent Birsen in the form of gold ingots.  Now Birsen is returning to Olokand with goods via the Kald River Trail which Dabin plans to sell to the Sheriff at a 25 percent markup. If Miri were to sell the information to the Lia-Kavair at she could hope to pocket 10 pennies for the information. Her own inclinations as a thief and her living conditions make the idea of a robbery obvious.  Miri needs to come up with a plan to rob either Birsen on the road or Dabin when the exchange with Maldan is made.


The details of the plan for the heist are up to the players.  Miri proposes way-laying Birsen on the trail.  Mention of cheating Dabin out of a lot of money will likely be all the persuasion necessary to get the players involved. Once the plans are set, Miri will learn that Birsen is expected in Olokand on Nolus 6.


If the players plan to ambush Birsen along the Kald river Trail they will have a long wait for him because he came up from Tashal by riverboat.  It may be that the players have decided to rob the shop after the goods arrive or are sold in which case they will be watching Dabin's shop and will not be overly surprised by the change in plans.


EVENT 3
BIRSEN ARRIVES!
On the day of Birsen's arrival, Dabin will confide in Tad of Naddo his chief clerk and send him to the docks to report Birsen's arrival.  Tad will come back to the shop around mid-day to report the
arrival of the riverboat bearing Birsen.  Then Dabin, and Hostim (the guard) will go to the docks and Tad will go to get two more guards especially hired for this occasion, Clerve and Somme. All five men will meet Birsen at the docks.


The goods will first pass customs with Dabin paying 90 pence in Hawking tax.  They will then be brought back to the shop in one small crate in a hired cart.  Once the goods are safely locked in the Cellar the two extra guards are paid off and Hostim takes his place in the cellar guarding the items.  At this point Tad will be dispatched to the Castle to inform the Sheriff of the safe arrival of
the goods.


Sheriff Maldan will not arrive to purchase the goods until the next morning.  He will arrive with a detachment of five guards on horseback and a pack horse carrying a strongbox.  Dabin has six
items to sell, all of Khuzdul manufacture:


The number of pence in brackets indicate the prices that Maldan will end up paying.  Dabin will make 2000 pence in the sale a profit of 500 pence.  He had to borrow 500 pence to finance the
venture so he will pay off Tinel of Portin, the amount owed before the end of the month, (the interest was compounded monthly).


In the near future Dabin will have around 2500 pence in the strongroom in the cellar.  This is a fairly large amount of silver even for a usurer.


EVENT 4
ROBBING THE SHOP
Should the players attempt to rob Dabin of Crasele's shop, either of the goods or the silver then this section can be used to detail the shop and its inhabitants.


4.1 The Usurer's Shoppe
Dabin of Crasele runs his usurer business out of his shop and home off Chessel Square.  The building is a large two-storey wooden structure built flush against four other businesses, (see Olokand Map #25).  The only entrance leads to the raised wooden floor of the office.  From here steps lead down into the kitchen and firepit.  Steps up from the kitchen lead to the living quarters.  The Cellar is reached from steps down from the kitchen area. The office area has Dabin's office and an office for Tad of Naddo and Miriamele.  The cellar has a door that can be latched from inside and is cluttered with crates holding trade goods and foodstuffs.  There is also a chair for the guard when he is stationed here.  The strongroom has a locked oak  door, which can be opened by a key that Dabin has or on a Devise roll at -10%.  Inside the room  is a locked metal-bound chest too heavy to easily move, (SIZ 23).  The lock on the chest is opened at a successful Devise at -25%.   All of the silver of the shop is locked in the chest every night by Dabin. 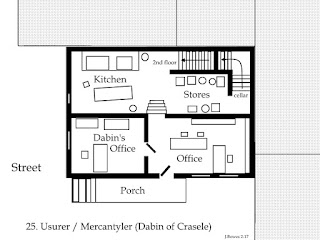 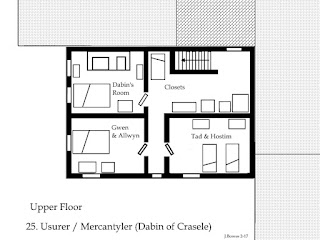 The living area upstairs holds the rooms for Dabin's family and staff.  There are large rooms for Dabin and his wife Cherin and for his daughter Gwendellyn and her husband Allwyn.  A smaller is for the staff Tad and Hostim.  Miri has a cot in a hallway cluttered with chests. Below is a list of the likely inhabitants of the shop:


Dabin (43)  May be away during the day.
Cherin (33)  Only away in the morning at the market.
Gwendellyn (16)  She is out during the day often.
Allwyn (22) Is out often day and night.
Tad (44) He is in the shop unless out on business during the day.
Hostim (35)  When off-duty after dusk he frequents the Kald and Castle Inn.
Mirimele (25)  She is frequently away after work.


4.2 The Watch
The sheriff of Meselynshire in his role as bailiff of Olokand uses one company of his men as a town watch.  This company is stationed at the customs and bonding house and fluctuates between five and twenty-five members.  It has five permanent members and mercenaries or men from the sheriff's other forces bolster its ranks during the arrival of the Fur Caravans and during the Chelabin Tourney.


At this time there are only five men in the watch and three of them patrol the town during the daytime.  At night one man watches the road into town and one man "walks the beat."  This means that calling for the watch when your building is being robbed can often be futile.  This is
especially true at night when other shopkeepers are reluctant to leave their shops to investigate.


EPILOGUE
If the players successfully rob Dabin of the merchandise before their sale then they will find it very difficult to unload.  If they rob him of silver they need only be careful not to spend too much at once.  Suspicion may fall on them or Miriamele if she leaves the Usurer's shop right after the heist or if she is seen in the company of the players.


If they are quiet following the heist and go about their business as usual then Dabin will soon let
Hostim, Tad and Miri go because he will be short funds.  Allwyn will soon leave Gwendellyn and travel to Tashal to seek a wealthy widow.


Following the heist Dabin will be broke and will owe Tinel of Portin 500 pence.  Dabin will sell the shop and buy a smaller one to pay off the debt and set up a smaller business.  The next time the players pass through Olokand Dabin will be a small, low quality usurer of independent traders bound for Orbaal.