Tomb worlds in Stars without Number is the designation for planets that were inhabited during the Terran Mandate but which were cut off and dyed out during the Silence.


In my Wolf Sector setting I decided to include a Tomb world that has not been re-discovered. Perhaps a few pirates, explorers or merchants have stumbled upon it and moved on leaving clues to its location.


Tags Mutated Survivors, Poisoned Atmosphere, Vast empty ruins.
Enemies Demented Scavengers, Automated Ground to Air Defense, Mutant Predator.
Friends Archaeologist, Stranded merchant, Primitive surface tribe.
Complications The world’s atmosphere degrades materials, Buildings are collapsing.
Things Advanced Technology, Unused munitions, Ancient Historical documents.
Places Ruined City, Spaceport, Mutant Hive.
Gauss was a settled world before the scream with large cities, agriculture and factories. The planet should have been able to survive the silence. However, warring factions went to war over the best resources and destroyed much of the planet’s surface. First with advanced weapons and then ever simpler weapons. The chemical warfare is what killed most of the plant, animal and human life on the planet. In some areas life still clings to the planet but most areas are desolate. The mutated former human inhabitants live in hives underground subsisting on what plant life they can nurture hydroponically or by stealing from each other.


Gauss is orbited by a large moon called Gauss B on old charts and databases. The locals have various names for it - Godhome, Illithat’s Hammer, and Hel. 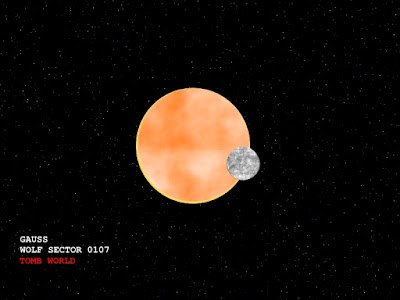