I watched the texture tutorial for Blender today so I wanted to use it right away. Because of the way I created the “Antelope” ship model adding textures would take some doing. So I created a new, simple ship.

This ship the “Niron” is my model for the big, classic free trader hauler that is most prevalent in Wolf Sector.  I build it with a big, open bay cut out into the hull where standardized containers can be held. The area to the rear of the cargo bay is filled with the engines and fuel bunkers. Forward of the cargo bay are the crew quarters, life pods and pressurized cargo space. 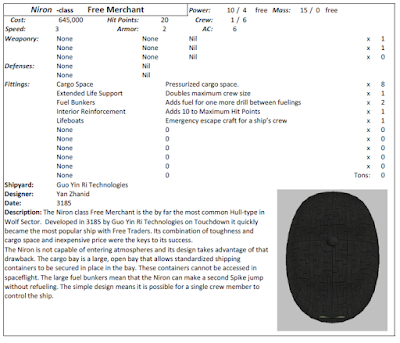 I ran it through the ship builder and came up with a fairly inexpensive ship at 645,000 credits. Possibly cheap enough for players to put in a down payment. With life support capable of supporting a maximum of 6 crew it is about right as a player owned (or leased) ship. I reduced the hard points on the hull to a single spot. I did not have the time to render something on the hard point. I figure many traders will not be able to afford weapons or defensive systems.

I think there are likely dozens of the Niron class ships wandering about Wolf Sector and some might even venture further into other sectors. Next thing I need to do is come up with a deck plan for the Niron class.