I am going to try to layout an RuneQuest Classic cult for my Khamad Setting using my limited knowledge of the cult rules and history. 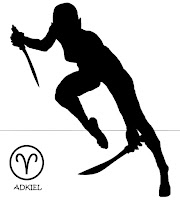 Background
The Adkiel cult has been prevalent in the Realms for centuries. Some saying that the Lady of Trickery arrived with the migration from the south thousands of years ago. The cult has always been a small one hiding in shadows but bent on influencing the leaders of the city-states. Thieves, merchants and politicians are attracted to the cult.  Adkiel is pictured as a bald, tunic clad young woman with twin daggers.


Reason for Continued existence
Adkiel serves a purpose among the court intrigues between the city-states and in the governments of the cities. Her cult is particularly strong in Balanz.


Social/Political position
Adkiel often influences the rulers of the Realms through the scribes and advisors to kings and lords.


Friends/Enemies
Adkiel frequently travels with Aniyam and takes the advice of Irat. Zeriel is a friend.  Her rival is Peniel (Lady of Lies) and Aedith (God of Treachery) is a long held foe.


Organization
The cult does not have a lot of organization. They meet in secret in Balanz where there is a fairly large membership of 500+. In other cities in the realms the worship is secret.


Requirements
A tithe of 10% of earnings.


Mundane Benefits
There are safe houses of Adkiel in many cities. The cult is heavily centered around Balanz and it sends agents to other cities who can be called upon for help.